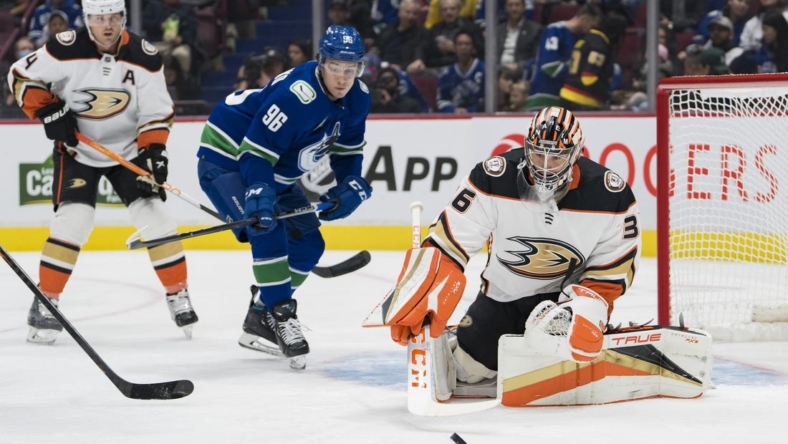 Andrei Kuzmenko recorded his first NHL hat trick and added an assist for the Vancouver Canucks in an 8-5 win against the visiting Anaheim Ducks on Thursday night.

Elias Pettersson tallied a goal and four assists, Bo Horvat notched two goals and an assist, and Spencer Martin made 26 saves for the Canucks, who have won three of four following a seven-game losing streak to start the season.

Troy Terry had a goal and two assists, Ryan Strome and Trevor Zegras each chipped in a goal and an assist, and John Gibson made 39 saves for the Ducks, who remain the only NHL team without a win in regulation this season.

Horvat tied it 1-1 with 20 seconds left in the opening period. He tipped in a slap shot from Quinn Hughes while on a power play.

The Canucks moved ahead 2-1 at 9:07 of the second period. Pettersson received a centering pass while stationed in front of the Anaheim net and kept the puck away from two defenders before sweeping it past Gibson.

Strome took a feed from Zegras in the right circle and scored with a wrist shot to cut the deficit to 3-2 with 46 seconds left in the second period.

Dakota Joshua got to a loose puck in front of the crease and scored 5:30 into the third period. The Ducks challenged for goalie interference, but the goal was upheld and the Canucks went on a power play for delay of game.

Kuzmenko then scored 14 seconds into the man advantage to make it 5-2.

Anaheim then got within one with consecutive tallies. Max Comtois scored on a breakaway to cut it to 5-3 at 7:51, and Zegras followed with a power-play goal on a long wrist shot to make it 5-4 at 13:35.

Kuzmenko then rattled off two scores in three minutes to put the game out of reach.

Horvat scored short-handed into an empty net with 56 seconds left to make it 8-5; it was his sixth goal in the past three games.