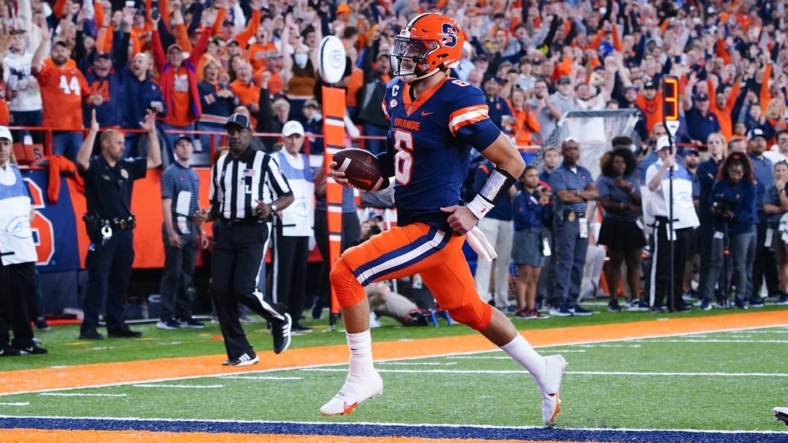 Andre Szmyt tied the Syracuse record by making five field goals, including the decisive boot with 1:14 remaining, as the host Orange nipped Virginia 22-20 on Friday evening.

The Cavaliers drove to near midfield on their last-minute drive, but Brennan Armstrong’s final two passes fell incomplete.

Shrader finished 22 of 33 for 277 yards with an interception and a rushing score for the Orange, who won despite committing four turnovers. Oronde Gadsden II led Syracuse with seven catches for 113 yards.

Armstrong went 19 of 38 for 138 yards with a touchdown and an interception. Perris Jones contributed 87 rushing yards and a touchdown for Virginia, which committed two turnovers, missed two field goals and had an extra point blocked.

The Cavaliers then missed field goals on consecutive possessions as Brendan Farrell was wide right from 50 and then from 48. Following the second miss, the Orange drove 11 plays and Szmyt kicked a 26-yarder to make it 10-0.

Armstrong fumbled on the next play from scrimmage, setting up Syracuse deep in Virginia territory. The Orange generated no offense on that drive, but Szmyt drilled a 32-yard field goal for a 13-0 cushion.

The senior kicker booted another field goal late in the first half to make it 16-0.

Keytaon Thompson got Virginia on the board on the opening drive of the second half, plunging in from 1 yard out. Pena fumbled the ensuing kickoff and the Cavaliers were back in the end zone two plays later, this time on a 4-yard run by Jones.

The Orange then converted three third downs — including a third-and-18 — as part of a 14-play drive that Szmyt punctuated with a 40-yard field goal in the final minute of the third quarter.

The score remained 19-13 until Virginia scored on fourth-and-goal from the 4 with 5:51 remaining in the contest. Armstrong found Lavel Davis Jr. over the middle for the TD, and the extra point put the visitors in front.