Andre Iguodala heading back to the Golden State Warriors

After starring for the dynastic Golden State Warriors from 2013-19, former NBA Finals MVP Andre Iguodala is headed back to the bay.

Not long after parting ways with the Miami Heat, Iguodala told the New York Times that he is heading back to California to finish his career with the Warriors.

This has been rumored about for some time now. The 37-year-old Iguodala will now provide a veteran presence behind Klay Thompson and Andrew Wiggins out on the perimeter.

Andre Iguodala on his relationship with Golden State Warriors, via New York Times

While Andre Iguodala has seen a downtick in production over the past couple seasons since leaving Golden State following the 2018-19 campaign, he’s still a plus-level wing defender. In fact, he finished with a defensive plus-minus of 1.8 last season — the forwards best output since Golden State’s championship 2014-15 campaign.

After selecting two teenagers in the 2021 NBA Draft last week, the Warriors are now looking to add veterans to the mix in free agency. 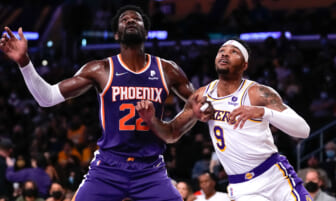 As for the signing of Andre Iguodala, he will also be able to help out as a potential two-guard with the aforementioned Thompson slated to miss the early portion of the 2021-22 campaign after suffering a torn Achilles last offseason.

Iguodala averaged 4.4 points, 3.5 rebounds and 2.3 assists for the Heat a season ago.