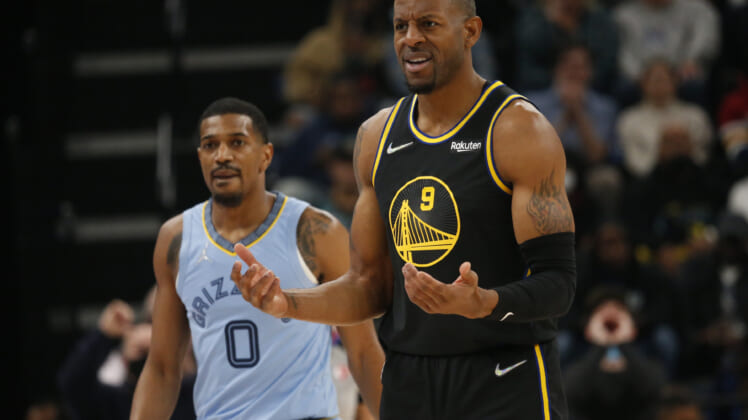 A three-time champion during his previous stint in Northern California, Iguodala returned to the Warriors this season in hopes of bringing another title back to the organization.

Unfortunately, the former NBA Finals MVP has dealt with a back injury that’s limited him to one game since January 20.

In talking about his return, Iguodala decided to blast the Warriors’ front office for their current plan to team youngsters up with the core group that led this team to five consecutive Western Conference championships.

“It’s just, you know, it kind of disrespects the former era. But I also don’t think you’re giving the new era the opportunity to grow and be kids, throwing that all on them and it’s not deserving. It’s just my perspective. Could be wrong.”

Since starting the season with a 27-6 record, the Warriors have played .500 ball (21-21). A lot of this has had to do with injuries the likes of Stephen Curry and Draymond Green have dealt with. Curry remains sidelined with a foot sprain while Green missed 29 games to a back injury of his own.

Add in Klay Thompson’s recent return from a two-year absence, and head coach Steve Kerr has struggled with his rotations.

Out of necessity, the Warriors have had to rely some on rookie first-round picks Jonathan Kuminga and Moses Moody. Meanwhile, young guard Jordan Poole has taken on a lead-scoring role with Curry sidelined to injury.

These three players will end up being the Golden State Warriors’ franchise cornserstones once the current big three end up calling it quits.

But the mix of young talent and aging veterans just hasn’t proven to be a success over the past couple months.

Sure Poole is playing great basketball (25.5 PPG, 45% three-point past 13 games). Kuminga has also had his moments en route to entering the NBA Rookie of the Year conversation.

But we’re talking about untested players for a team that fancies itself as legitimate NBA title contenders.

For Andre Iguodala and the rest of the Golden State Warriors’ veteran group, it’s likely more about the approach general manager Bob Myers took ahead of the 2021-22 season.

That is to say, refusing to give up on young assets for more proven veteran talent. It’s a short-term thought process with Curry, Thompson and Green in the back end of their careers. For Golden State’s brass, an attempt to remain viable in the post-big three era has played a role in their team-building philosophy.

For now, it could very well have an impact on the team’s hopes to contend for an NBA title this spring and summer.