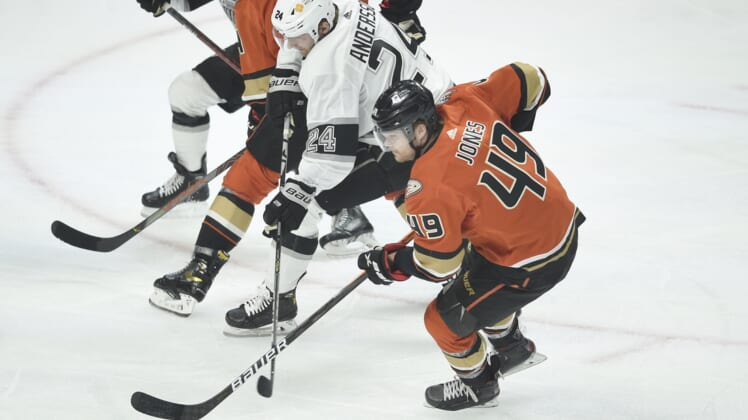 Cam Fowler scored with 1:01 left in the game and the visiting Anaheim Ducks rallied to edge the Los Angeles Kings 3-2 on Wednesday night.

Sam Carrick and Sam Steel also scored, and John Gibson made 28 saves for the Ducks (15-28-7, 37 points), who rallied from a 2-0 deficit in the second period to end a five-game losing streak.

Adrian Kempe had a goal and an assist, Gabriel Vilardi also scored, and Calvin Petersen made 19 saves for the Kings (18-23-6, 42 points), who dropped eight points back of the final playoff spot in the West Division with nine games remaining.

Vilardi had six goals in the first 21 games this season, but none over the next 23 before putting in a rebound late in a power play for a 1-0 lead at 4:50 of the second period.

It came about when Gibson and Fowler miscommunicated as Gibson came out to play a slow-moving puck in the high slot. Neither took possession before Kempe pounced on the loose puck and scored into the wide-open net.

Carrick made it 2-1 at 12:53, driving to the net and pushing the puck underneath Petersen and across the goal line.

Steel tied it 2-2 at 16:35, hitting the net with a one-timer from the slot off a pass from behind the net from Rickard Rakell.

Two of the top six picks in the most recent NHL draft went head-to-head.

Quinton Byfield, the second overall pick, led the Kings with four shots on goal in his NHL debut and was 8-4 in the face-off circle.

Defenseman Jamie Drysdale, the No. 6 pick, was playing in his 19th NHL game for Anaheim.

Simon Benoit, another defenseman for the Ducks, also made his NHL debut on Wednesday and had four hits.

The Ducks also recalled Trevor Zegras, their first-round pick from 2019, from San Diego of the American Hockey League, and he played 14:37 in his 18th game this season.