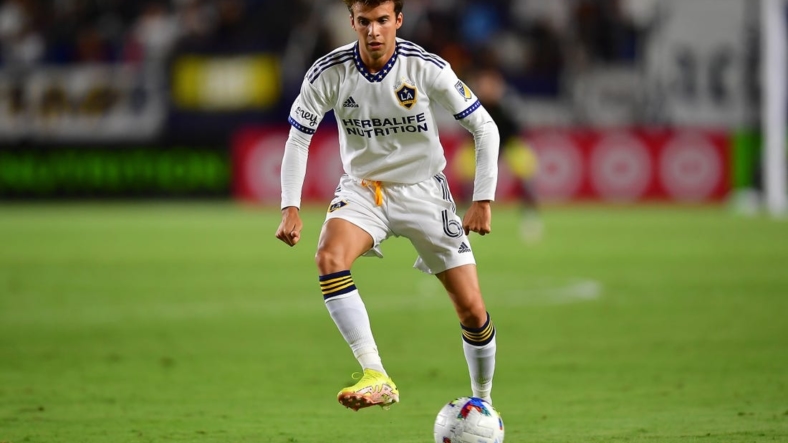 So the coach, whose team plays Wednesday night at Vancouver, knows of what he speaks.

“You want somebody who is confident, who’s going to step up, who wants the responsibility on their shoulders, especially at the death when it’s 1-0,” Vanney said Saturday.

Vanney said that after newcomer Riqui Puig stepped up and scored in the final minute of second-half stoppage time to give the Galaxy a 1-1 draw at Nashville.

The result extended the Galaxy’s unbeaten streak to six games (2-0-4) as they continue to chase the Western Conference’s seventh and final playoff spot. Los Angeles (11-11-7, 40 points) is eighth in the West, three points behind Real Salt Lake.

It was the second consecutive game that Los Angeles has been awarded multiple PKs, going 1-for-2 in each. Javier “Chicharito” Hernandez, despite his team-leading 14 goals, had the misses.

That’s why Vanney was fine with Puig, the 23-year-old midfielder signed from FC Barcelona last month, grabbing the ball for the decisive kick Saturday.

“I don’t think there was any chance anyone was taking it out of his hands,” Vanney said. “He wanted it.”

The Whitecaps (9-14-7, 34 points) have been headed in the opposite direction, losing their past three matches and going 2-6-4 over their past 12 to reach the brink of playoff elimination.

Vancouver will again be without leading scorer Lucas Cavallini, who is midway through his four-game suspension for violent conduct. The Galaxy will be without Sega Coulibaly and Raheem Edwards due to yellow-card accumulation.

In the previous meeting between the teams this season, the Galaxy won 5-2 at home on Aug. 13 as Samuel Grandsir scored twice.