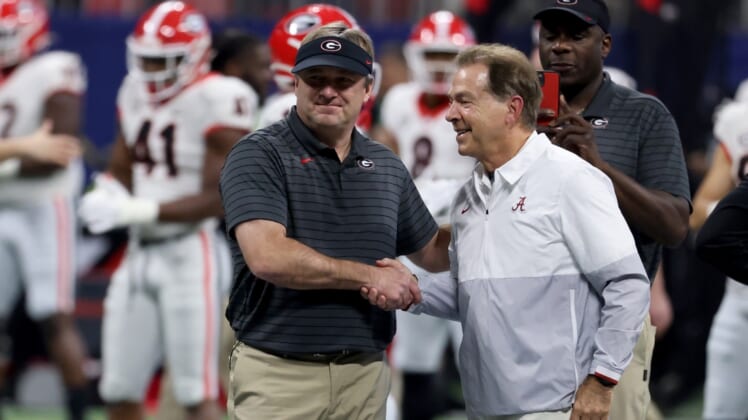 Amid a surge of COVID-19 cases, the College Football Playoff established contingency plans Wednesday regarding forfeits, schedules and other scenarios for the semifinals and national championship.

For the playoff semifinals — the Cotton and Orange Bowls — should one team be unavailable to play, it would forfeit the game and its opponent would advance to the national championship game.

If both teams in one semifinal are unable to play, that game would be declared a “no contest,” and the winner of the other semifinal game will be declared as the sport’s national champion.

“As we prepare for the playoff, it’s wise and necessary to put into place additional precautions to protect those who will play and coach the games,” College Football Playoff executive director Bill Hancock said in a statement. “These policies will better protect our students and staffs while providing clarity in the event worst-case scenarios result.”

In addition to these contingencies, the College Football Playoff has implemented several other policies. It will allow teams to arrive to the bowl sites two days before a game, instead of the usual five days before the game.

Attendance at bowl games was made optional for the bands, sprit squads and staff members of competing schools. For media members, all access to players and coaches will be virtual.

Access to the playing field will also be more limited to those who aren’t players, coaches or essential staff.

For the Fiesta and Peach Bowls, the College Football Playoff, bowl organizers and ESPN would try to reschedule the game within one week of its original date if one or both teams involved are unable to play. If a new date can’t be set, the game will be a “no contest.”

For now, the College Football Playoff semifinals are set for Dec. 31. No. 1 Alabama will face No. 4 Cincinnati at 3:30 p.m. EST at the Cotton Bowl, and No. 2 Michigan will take on No. 3 Georgia at 7:30 p.m. EST at the Orange Bowl. The national championship game is scheduled for Jan. 10 in Indianapolis.

Michigan offensive tackle Andrew Stueber said Tuesday that the Wolverines were getting a “full team booster shot” on Wednesday.

“We implemented masks in meetings, maintaining social distancing,” Stueber said. “A lot of people are taking their meals to go, not really sitting too much.”