Tommy Paul of the United States celebrates a point against Cameron Norrie of Great Britain during their round four match of the BNP Paribas Open, Wednesday, Oct. 13, 2021, in Indian Wells, Calif.

The 24-year-old New Jersey native excelled on second serve points won, converting at 61 percent (23 of 38) compared to 41 percent for his opponent.

“I played some of my best tennis to beat Denis,” Paul said. “It’s the most fun I’ve had playing a tennis tournament. It means everything to win my first title. I’ve worked so hard to achieve this and I’d like to break into the Top 30 at some point.”

Shapovalov, who won his first career championship at this tournament in 2019, connected on 70 percent on first serves but was saddled with 28 unforced errors. 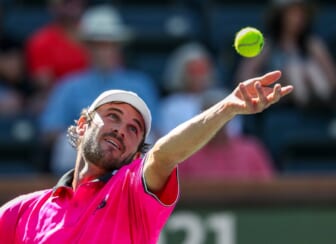