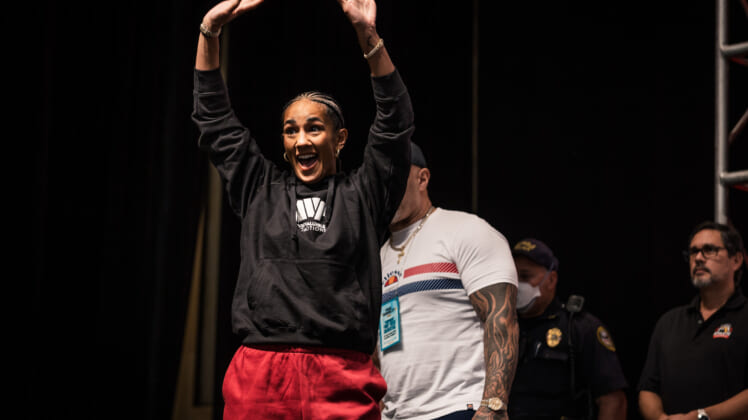 Women’s boxing had a historic moment this past weekend. Not only was the bout between Serrano and Taylor a booking of champions considered to be the two best female pugilists on the planet, but it was the first women’s bout to ever headline a boxing card inside Madison Square Garden. That alone would have been something to look back on with great pride. However, the bout also delivered on all the hype surrounding it in performance and box office numbers.

The fight for the WBA, WBO, WBC, IBF, and Ring Magazine lightweight titles turned into an absolute war that filled up the timelines on many combat sports fans’ social media accounts, as the two women battled in a closely contested bout won by Taylor in a controversial unanimous decision. The fight was co-promoted by Matchroom Sport, led by boxing super promoter Eddie Hearn, and Most Valuable Promotion. Which is fronted by YouTuber turned boxer Jake Paul.

It seems the combination of Paul’s attention-grabbing style and the proven track record of Matchroom pulled in fans from all corners of the combat sports realm. The fight actually sold out Madison Square Garden in New York and had 19,187 fans in attendance. However, on Wednesday DAZN reported that the event was the fight sports streaming services’ biggest female-led event ever.

Serrano vs Taylor earned over 1.5 viewers globally, with the biggest audiences being in the US and the United Kingdom. Serrano is an American raised in Brooklyn, New York, while Taylor hails from Ireland. Spain, Canada, Ireland, Germany, Australia, Italy, Japan, and Brazil rounded out the top-10 of international audiences that tuned into the fight.

“Everyone was talking about this fight being the biggest in women’s boxing history, but I think it actually exceeded everything that people were talking about. This was a special, special moment,” Taylor said in a statement released by DAZN. “I think that both myself and Amanda have broken down so many barriers in the last few years in our sport. I love my sport and I want to keep making history.”

The event was in such high demand, that the DAZN app was the highest-grossing sports app on the Apple and Google digital stores over the weekend and the most downloaded sports app in Ireland on both iOS and Android.