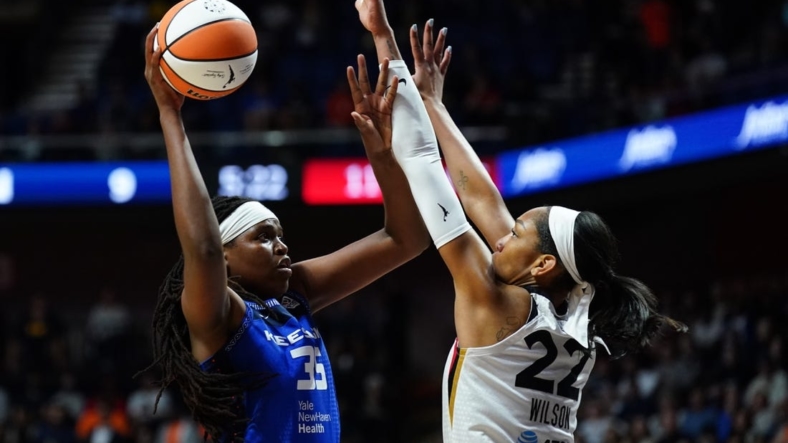 Alyssa Thomas racked up the first triple-double in WNBA Finals history and the Connecticut Sun extended their season by turning back the Las Vegas Aces 105-76 in Game 3 on Thursday night in Uncasville, Conn.

Thomas recorded 16 points, 15 rebounds and 11 assists for the Sun, who still trail the best-of-five series 2-1. She had the triple-double with 8:35 remaining.

Game 4 is set for Sunday, also in Connecticut. If a Game 5 is necessary, it would be played Tuesday night in Las Vegas.

The Sun used a torrid stretch early in the game and repelled several rallies from the Aces to take advantage of their home-court setting. Jonquel Jones notched a team-high 20 points.

The Aces were within 75-69 with a minute to play in the third quarter. The next eight points were posted by the Sun, who stretched their lead to more than 20 points after a similar margin was reduced quickly earlier in the game.

Connecticut, which was held to 64 and 71 points in the first two games of the series, reached the 71-point mark on Thursday with more than three minutes to play in the third quarter.

All five starters for the Sun held double-figure point totals before the end of three quarters. Connecticut flexed in the paint with a 38-24 rebounding bulge on the night.

The Sun rose quickly after Las Vegas held an early 15-9 lead. Connecticut went on a 15-2 run to go on top by seven.

The margin grew to 34-19 by the end of the first quarter, and the Sun didn’t stop there. Connecticut scored the first seven points of the second quarter, eventually holding a 48-25 edge.

The Aces got it together for an 8-0 spurt in the last 85 seconds of the first half. The surge was capped by Plum’s 3-point runner just a few steps after crossing midcourt, closing the gap to 53-42 at the break.