Alouettes’ Trevor Harris in pursuit of another big day vs. Redblacks 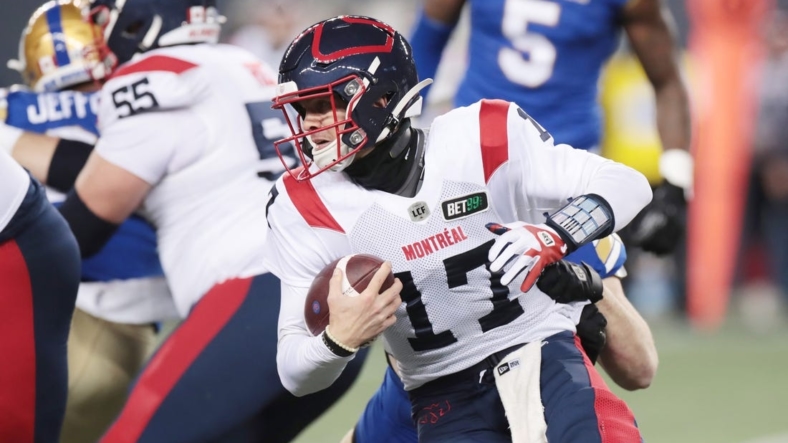 Montreal Alouettes quarterback Trevor Harris will be riding the momentum of a season-best performance when he faces the visiting Ottawa Redblacks Friday night.

Harris threw for 382 yards and three touchdowns against the visiting Hamilton Tiger-Cats on Aug. 20. He has passed for 2,322 yards and 10 touchdowns this season.

The Alouettes (4-6) have not played since defeating Hamilton 29-28.

Harris had touchdown passes of 54 yards to Kaion Julien-Grant and 45 yards to Reggie White Jr. against the Tiger-Cats.

“The total yards surprises me sometimes,” Harris said. “Sometimes it feels like you throw for more than you did. That game, the receivers got open and the offensive line was protecting. When we’re able to do that, it’s going to be tough to stop us.”

“We’re finding different ways of buying time,” Maciocia said. “We know if we keep (Harris) upright, allow him to transfer his weight, climb into the pocket and throw the ball downfield, more often than not he’s going to be accurate. The numbers support that. You can’t throw off your back. We have to keep him upright. The way to do that is to be creative with how we protect so he buys the entire time.”

The Redblacks (2-8) are coming off a 25-18 road victory over the Edmonton Elks on Saturday.

Redblacks defensive back Monshadrik Hunter, who is returning from a hamstring injury, will be out to stop Eugene Lewis, one of the top receivers in the league. They were teammates at Montreal last season.

“He’s got skills, he’s talented and everything, but … Geno knows, he knows,” Hunter said. “We’ve both been there, done that. We both know who the top man is. Against everybody else, I like to see him show his skill. But against me, he’s going to have a bad day. This is a warning: He needs to bring his A game.”

Ottawa receiver R.J. Harris (hip) and defensive back Sherrod Baltimore (hamstring) have been ruled out of the game on Friday.