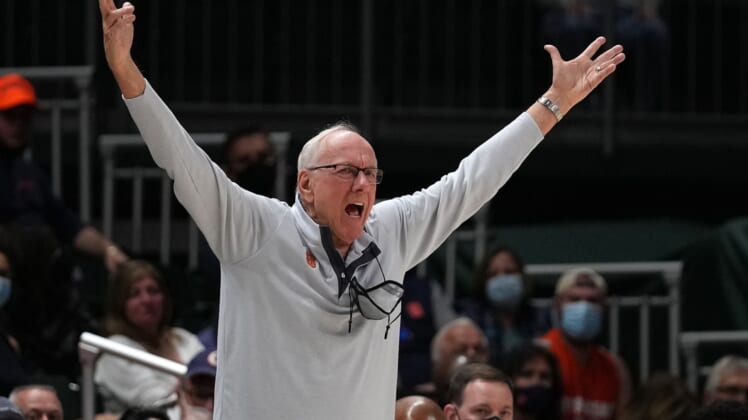 The Demon Deacons forced overtime with the final basket of regulation. Buddy Boeheim of the Orange missed a potential tying 3-pointer on the game’s last shot.

Syracuse (7-8, 1-3), which has lost three games in a row, has the worst 15-game record in Hall of Fame coach Jim Boeheim’s 46-year coaching career.

Jimmy Boeheim notched 21 points, Buddy Boeheim added 17, Joe Girard III had 13 and Cole Swider chipped in with 10 points for Syracuse, which shot 36.0 percent from the field.

In overtime, Wake Forest led 75-73 before neither team scored for more than 2 1/2 minutes until Frank Anselem of Syracuse was fouled after getting an offensive rebound. At the foul line, Anselem made the first shot and missed the second with 22 seconds to play. Williams made two free throws with 13 seconds left.

Jimmy Boeheim converted a three-point play to push the Orange to a 69-67 edge with 1:02 to play in regulation.

A Wake Forest turnover gave Syracuse a chance to extend the margin, but Swider’s shot was blocked by Dallas Walton. Another Wake Forest giveaway at the 11.7-second mark seemed to put the Orange in good position.

After a Wake Forest foul, Jimmy Boeheim committed a turnover. That set up Walton’s tying dunk that forced overtime. Wake Forest didn’t make a field goal in the previous 4 1/2 minutes.

It was a closely contested first half with Wake Forest leading 38-36 at the break.

The Demon Deacons didn’t trail for only 13 seconds from the 9:52 mark until the three-point play by Jimmy Boeheim.

Wake Forest played its second game in a row without Daivien Williamson, the team’s third-leading scorer who has been out because of COVID protocols.