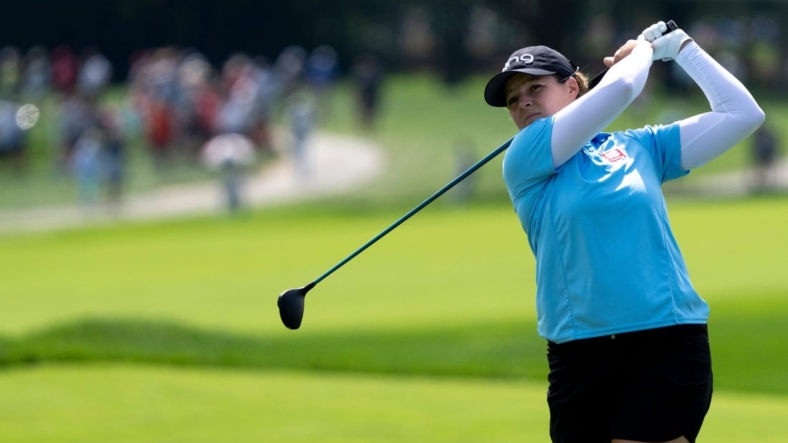 Ally Ewing got off to a fast start and fired a 5-under-par 67 in Saturday’s third round to take a one-shot lead at the inaugural Kroger Queen City Championship in Cincinnati.

Ewing sits at 16-under 200 for the tournament, one shot ahead of Italy’s Maria Fassi, who matched Ewing’s 67 at Kenwood Country Club.

China’s Xiyu Lin (70) is alone in third place at 14 under, two shots back. Four players are tied for fourth at 12 under, four shots behind Ewing.

Ewing birdied three of her first four holes and finished with six for the round. Her only blemish was a bogey on the par-4 18th hole.

“It was exciting to get out to a good start,” Ewing said. “My mindset going into today was to play within myself and go out, execute shots, and I did that really well. Unfortunate bogey on 18. It’s a tough hole and didn’t get a ball up and down. Really happy with how I played and how I handled myself, and obviously in a good position for tomorrow.”

Ewing is looking for her third career LPGA Tour title.

“I’ve had my ups and downs this year just kind of mentally trying to gain that confidence back in every aspect, whether it’s playing solid, putting a score together, rolling in putts,” Ewing said.

Fassi also started quickly, posting four birdies in her first seven holes. She carded a bogey on the eighth hole but responded with an eagle on the par-5 15th.

“I’ve said it with my team, and the people around me know that this has been a tough year,” Fassi sad. “But the golf was there. I haven’t seen the results yet, so I’m super excited to see what tomorrow holds, and keep doing what we’re doing of having a lot of fun on the golf course. … I’m excited that we get 18 more holes to do it again.”

Second-round leader Jeongeun Lee6 of South Korea shot 73 on Saturday to fall into a tie for fourth at 12 under.