First Take: All is Not Lost Raider Nation 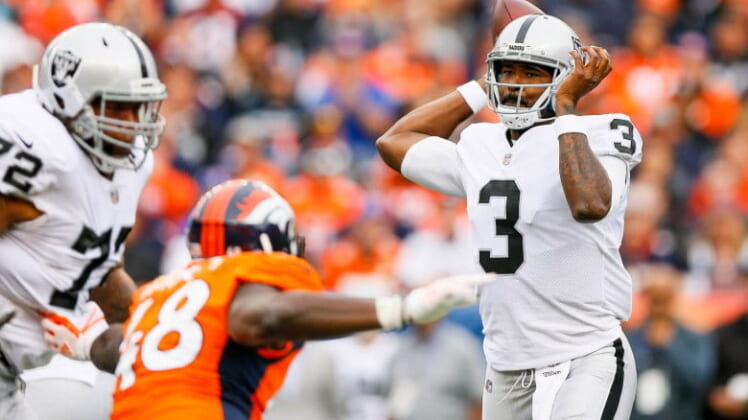 Today’s loss to the Denver Broncos doesn’t sit well with the Raiders or their fans but the season is long and this team has the talent to do what we all want them to do – go far in the playoffs.

A browse through Raider Nation on Twitter this afternoon would make you think the football apocalypse is upon us.

It’s not – let’s all take a deep breath.

Yes, “The Franchise” a.k.a Derek Carr left the game in the third quarter with what is being described as back spasms. During the postgame press conference, coach Jack Del Rio said “It should be something that clears up quickly,” which is good news for his team and fans.

Not surprisingly, Del Rio was somber and wanted to get off the podium as fast as he could. You can understand as he just watched his vaunted offense fail to convert on third downs all afternoon, they couldn’t rush the ball, and their passing game was inconsistent.

The Raiders failed to make even one trip into the red zone.

“I thought we stayed in it and thought we had a chance – I know we had a chance at the end,” Del Rio said. “Despite only rushing for 24 yards, and despite converting on only 2-out-0f-12 on third down. If you hold someone to 16 (points) you should have enough to scratch out a win.”

Del Rio went on to declare the team’s inability to run the ball – especially with their stout offensive line – has been the most disappointing outcome so far.

After starting the season 2-0, the Raiders have now lost two straight including an uninspired and sloppy loss on the road in Washington. Today’s loss at Denver was a tough matchup for this team. Playing without injured wideout Michael Crabtree, and then losing Carr with the game still within reach, stings.  The Raiders offense struggled against a very good Broncos defense, failing to find the rhythm they had earlier on.  The running game game – and Marshawn Lynch – were virtually invisible.

Lynch only rushed for 12 yards but gained more attention for his social activism.

Lynch, who has always walked to the beat of a different drummer, again created a stir walking into the game today wearing an anti-President Trump T-shirt. Despite grumblings of a lack of focus over the mass social protest the Raiders and Lynch participated in during Week 3, apparently Lynch, who had just nine carries for 12 yards, perhaps is still focused on it.

Still, the Raiders may face a daunting  two-game lead deficit to current AFC West leader Kansas City who play at home against the Redskins on Monday Night Football tomorrow. The race in the division is going to be a bloodbath all season. With the exception of the embarrassment that is the Carson Chargers, this division is the most competitive in all of football. The Chiefs are stronger than anticipated and the Broncos continue to surprise. With a new coach, new quarterback, and lots of roster turnover, they’re getting it done.

Despite this, the Raiders are a talented team and their best days are still ahead of them. I truly believe that.

Still, there are some major concerns after four weeks.

First, the offense. On paper, this team is in the Top 3 in the league. With a healthy Carr, and all of the weapons at his disposal, there is really no excuse for the kind of performances we’ve seen in the past two weeks. Play calling has been perplexing (fake punt and not going for field goal earlier in the game) and the inability to get the unit into a rhythm has been hard to watch. Aside from Carr’s injury today, he has not looked confident or on track the past two weeks. Is it the system? The play selection? Or something else? Add in what Del Rio said about the offensive line, and the lack of a running game, and the team has lots to work on once returning home.

Second, what’s the current state of the chemistry on this team? It seemed good to start the season but has been suspect the past two weeks. The players don’t seem on the same page and the focus seems to be lacking. There could be many reasons for it, but the coaching staff and players need to get this train on the right track as the Raiders face two more tough division games after a showdown with Baltimore at home next week.

The race is far from over as Oakland still has two games against Kansas City, Denver at home and the lowly Chargers twice. I still believe they will win the division but there has to be renewed vigor and focus for this  club to live up to their potential.

Let me say this: the defense has its up and down moments but is far better than anyone would have surmised. They’re growing and kept this team in the game against the Broncos despite another paltry offensive outing. You can’t look past that.

Head coach Del Rio and his staff has some work to do – that’s for certain. No one in Raider Nation would ever argue there are good losses. That said, expect the staff and players to use this bitter division loss to motivate and focus the Raiders for the remainder of the schedule.

The Raiders played three of their first four games on the road and wound up with a split. It could be worse.