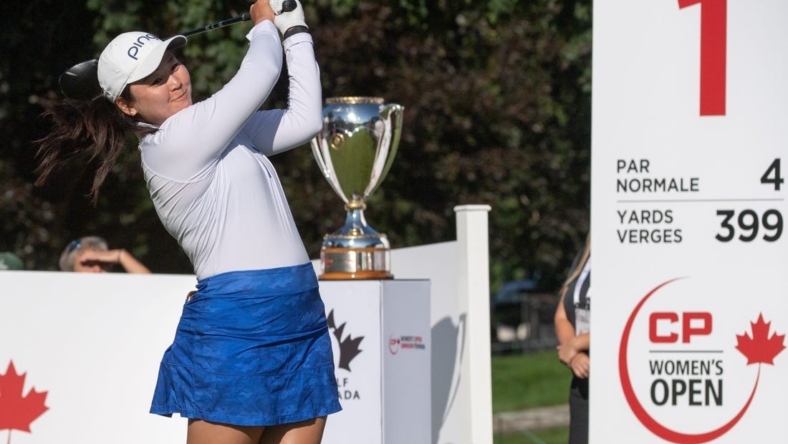 Allisen Corpuz shot her second straight 5-under 65 on Saturday and holds a one-shot lead at 10-under 130 after two rounds of the Pelican Women’s Championship at Belleair, Fla.

Sweden’s Maja Stark fired a 63 and is tied for second with Lexi Thompson (67) and Mexico’s Maria Fassi (69).

Defending champion Nelly Korda (66) and Spain’s Carlota Ciganda (68) are two shots back in a tie for fifth.

The tournament was shortened from 72 to 54 holes after Tropical Storm Nicole forced Pelican Golf Club to stay closed Thursday.

Corpuz, 24, had six birdies and one bogey on Saturday. Three of the birdies came over the last five holes and helped her hold the lead heading into the final round.

“I think it’s always really good to see yourself up there,” said Corpuz, a two-time All-American at Southern California. “I mean, really just had a good year so far and kind of want to end the season on a good note. Trying to put myself in position for (Sunday), and, yeah really happy that I can be where I am.”

“I think just the putter was a lot better today than it was yesterday,” Stark said. “I feel like I played kind of the same, managed to get a couple of really close wedges, and then, yeah, I think that was it. Didn’t mess up as much as usual.”

Thompson didn’t make her initial birdie until No. 7 and ended up with four birdies and one bogey.

Thompson is looking for her 12th career LPGA title, but hasn’t won June 2019. She was pleased with the way the course is holding up after the fierce storm that hit earlier in the week.

“I think every experience helps,” Thompson said. “Every time I tee it up there is always something to be learned. But I do love this golf course. It’s always in great shape for us. The last two days have been absolutely perfect weather.

“I don’t know what (Sunday) has in store, but hopefully the same.”

Fassi was unable to follow up her opening-round 62 as she had three birdies and two bogeys on Saturday. The bogeys came back-to-back on Nos. 14-15.

“A lot more kind of just saving pars and making four (and) five-footers, again, to save pars and stuff,” Fassi said. “Just couldn’t really get much going. I still managed to get under par and be right there for tomorrow. I know there are plenty of birdies out there for me, and just very excited to go out on Sunday and be in contention.”

Canada’s Brooke Henderson, who shot 71 on Friday, withdrew prior to the second round. No reason was immediately provided.

The Pelican is the penultimate tournament of the season and the final chance for players to qualify for the CME Group Tour Championship next week. The top 60 players in the season standings will qualify.