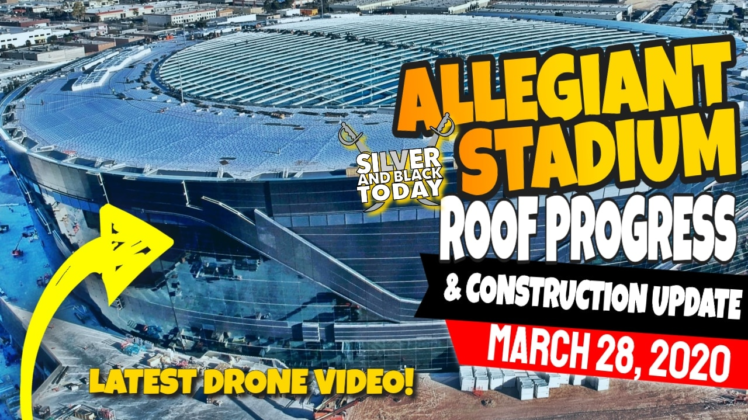 The Silver and Black Today Drone was finally able to get back in the air Saturday morning and shot some stunning footage of the Las Vegas Raiders new Allegiant Stadium.

The week Allegiant Stadium Las Vegas was hit with its first worker testing positive for the novel coronavirus, progress on the Las Vegas Raiders stadium forged ahead unabated by the news.

On the Allegiant Stadium roof, work buzzes along as the installation of protective sheeting for the ETFE install is now started. The entire roof framing progress appears complete. The installation of these roof panels should be completed by May.

On the ground, the massive field tray, where the Raiders Allegiant Stadium natural surface will be kept and moved in and out for gameday, is also progressing nicely. This area, visible in the video, will serve as a massive fan experience and game day party area for Raiders fans.

Fans are calling Allegiant Stadium the “Death Star” and “The Black Pearl” as its ominous black exterior gives it a distinctive character.

Allegiant Stadium jobs are some of the only left working in Las Vegas during the virus shutdown. It appears the men and women building the Raiders new home are staying on schedule the slated July 31st substantial completion date.

Don’t forget: Join us Sunday as we welcome Hunter Renfrow, OverTheCap.com’s Jason Fitzgerald, Moe Moton, Tommy White & John Vizcarra on our CBS Sports Radio show from 8-10am PT. Listen live via the Radio.com app or watch our simulcast on our YouTube channel.