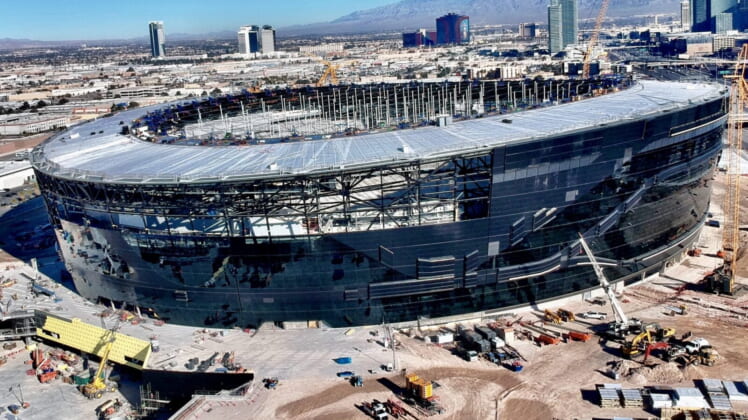 In addition to being the home to Las Vegas Raiders and UNLV football, Allegiant Stadium Las Vegas can also host international soccer games and, of course, can expand for the big one – the Super Bowl.

When the State of Nevada decided to fund Allegiant Stadium with a new hotel tax on Las Vegas visitors, it did so not only to secure the city’s NFL franchise – the newly-minted Las Vegas Raiders – but also to be a player and secure other big events. Revisiting documents we obtained last year, we look at a few of the Allegiant Stadium configuration plans to see how the stadium can adjust and adapt to host these big money makers.

As recent reports indicated, Allegiant Stadium could open in August and host its first-ever event: a major international soccer match.

The Washington Post reported Barcelona and Real Madrid could open Las Vegas’ newest architectural wonder. The rivalry and game – dubbed “El Clasico,” would not only be the test/soft opening for the Raiders season but would also allow Allegiant Stadium officials to pull off an event in a different configuration than football.

Allegiant Stadium renderings show the configuration the stadium will use to host large soccer matches (see below). For those events, Allegiant Stadium will seat more than 61,000 fans. Last year, Las Vegas said it had abandoned plans to pursue World Cup games at the stadium due to requirements for more than one open-air facility in the area. That does not mean it won’t host international soccer events, like El Clasico, that require that sort of capacity, according to the Las Vegas Stadium Authority Board.

There are also multiple efforts to acquire a Major League Soccer franchise in Las Vegas – one of which could use Allegiant Stadium as a home. Bill Foley, the owner of the NHL’s Vegas Golden Knights, said his effort to bring professional soccer to Las Vegas includes possibly utilizing Allegiant Stadium Las Vegas to serve as the team’s home venue. There has been no further development on Foley’s push since last summer. A competing effort for an MSL team is being made by the City of Las Vegas.

There’s no bigger sports money maker in the United States than the NFL’s Super Bowl and there’s consensus “it’s not if but when” as far as Allegiant Stadium and Las Vegas hosting its first big game.

According to the documents, the addition of several standing-room-only (SRO) spectator areas, expanded suites, additional removable seats, and other configurations, the Allegiant Stadium appears to be easily expandable to reach the magic number. Although these documents are over a year old, sources on the project tell us they remain accurate.

In addition to SRO sections and some lower bowl seating addition, expansion of luxury suites and sections of temporary seats would be added as well. This includes rail-mounted seats in the north end zone and peristyle (grandstand) style seats in the south end zone. See

The stadium’s ability to expand leaves no stone unturned, evening pick up a couple of hundred seats wherever it can fit them.

While the stadium will primarily serve as the home to the Raiders, UNLV, and other sporting events, it also can hold large-scale concerts, trade shows and other recreational events like Wrestle Mania.

For the latest footage of the stadium, check out our drone footage: