All That is Raiders Football -The Autumn Wind 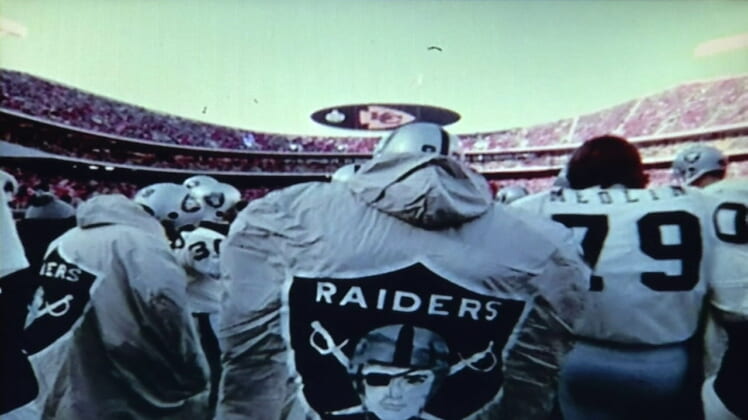 Jon Fascenda. The voice of the NFL.

The football voice of God.

Longtime football fans grew up listening to the original voice of the original NFL Flims. His deep and poetic voiceovers kept several generations excited about football and served as the narrator of so many great NFL stories.

Perhaps Fascenda and NFL Film’s greatest work of football poetry can be found in one piece of work that has helped define what the Raiders brand is all about: The Autumn Wind.

The poem was written by former NFL Films President and co-founder Steve Sabol and produced in 1974, with the soul pounding music of Sam Spence. Sabol, who was attempting to describe the weather as it relates the return of the NFL during the fall, instantly struck a chord with the late Al Davis who was said to have had goosebumps when listening to it for the first time. Davis was known to have said it did capture everything that was true and right about Raiders football.

It’s hard not to connect the team with the poem. It’s starts out seemingly describing the attitude and general personality of the late owner, its former players and even coaches.

The Autumn Wind is a pirate
Blustering in from sea,
With a rollicking song, he sweeps along,
Swaggering boisterously.

It also fit the original, and soon-to-be former home, of the team in Oakland. Nestled in the East Bay, the motif and lines of the poem so perfectly fit the pirate persona concocted and perpertuaed by Al Davis himself.

It’s hard to deny the shiver any football fan gets up their back when hearing that first line. Even Raider haters – those honest enough to put aside their disdain for a moment – will tell you it is the finest in football poetry.

His face is weather beaten.
He wears a hooded sash,
With a silver hat about his head,
And a bristling black mustache.

Raider Nation has always been about rebellion, outcasts, the down trodden and the outlaw. It’s the team’s mystique embraced by everyone from stock brokers to ex-cons, from kids to old folks in their 80s. On Sunday, Raider Nation becomes this vision of the mysterious and threatening outlaw. The day when all that matters is crushing your opponent and plundering their end zone.

He growls as he storms the country,
A villain big and bold.
And the trees all shake and quiver and quake,
As he robs them of their gold.

Al Davis and the Raiders both past and even present have always relished being the universal bad guys. To be the villain means you’re feared, respected, and successful. Despite recent years when the franchise struggled, the Raiders remain the NFL’s favorite villain from Kansas City to New England. The national disdain for the NFL’s band of pirates is another reason why the team is so beloved. It’s why jersey and merchandise sales always rank in the Top 10. People like to be a part of the mystique – it’s unquestionable.

The Autumn Wind is a Raider,
Pillaging just for fun.
He’ll knock you ’round and upside down,
And laugh when he’s conquered and won.

The spoils of victory. Pirates and raiders do it for the adventure and the fun. The Raiders are this way as are most NFL teams. The poem ends with the humiliation of the defeated being celebrated as those who’ve been vanquished sit unable to change the outcome.

I am sure there have been many pieces of journalism or filmmaking that have explored The Autumn Wind with a much more critical and in-depth eye than I am doing in this space. Yet, its perhaps the sheer simplicity of the work, coupled with its clear relevance to the Raiders, is what makes it resonate so well. Not all great works of art have complex roots, complex meaning or structure. In the case of Sabol’s masterpiece, I think that rings true.

I don’t know about you, but every time I watch the Raiders – or the entire NFL – John Facenda’s voice is in my head. He’s the narrator of the NFL experience for me. He’s the voice of football poetry squarely rooted in all that is the magical tradition of Raiders football.