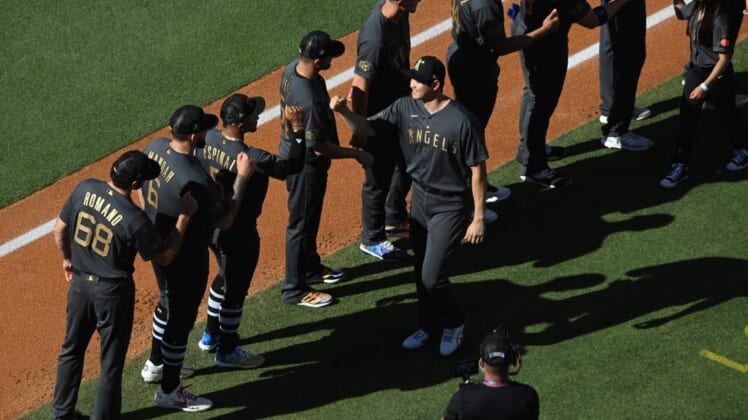 Rachel Robinson, the widow of Major League Baseball’s Jackie Robinson, was honored before Tuesday’s All-Star Game in Los Angeles on her 100th birthday.

With All-Star players from both leagues gathered on the field behind him, the Dodgers’ Mookie Betts addressed the crowd: “It’s Miss Rachel Robinson’s 100th birthday. So on the count of three, I want everybody here to say: ‘Happy Birthday, Rachel!'”

After the first inning, a tribute to Mrs. Robinson was shown on the DodgerVision screens in right and left fields.

Jackie Robinson, to whom Rachel was married for 26 years, died in 1972 at the age of 53. He broke baseball’s color barrier in 1947 with the Brooklyn Dodgers, who moved to Los Angeles in 1957.

–With Aaron Judge at the plate in the first inning, NL starter Clayton Kershaw made a move to first and caught Shohei Ohtani far off the base. It was the first pickoff in the All-Star Game since 2008, when Carlos Zambrano nabbed Milton Bradley.

–St. Louis Cardinals first baseman Paul Goldschmidt homered as part of a two-run first inning for the NL. It was the first time a player had gone deep in the first inning of an All-Star Game since Kris Bryant did so back in 2016.

–After Tampa Bay Rays starter Shane McClanhan surrendered those two runs in the first, 10 AL pitchers combined to shut out the NL while allowing just one hit.

–Down by two runs, the AL hit gold in the top of the fourth inning with back-to-back home runs, first with a monster two-run homer by Yankees slugger Giancarlo Stanton, followed by a solo shot from Byron Buxton. They were the first back-to-back homers in the All-Star Game since 2018, when Alex Bregman and George Springer homered in the 10th inning.

–Stanton was named All-Star Game MVP after going 1-for-2 with his two-run blast. He is one of six players to win MVP in their lone All-Star Game appearances.

–Playing in front of his home fans, Los Angeles Dodgers pitcher Tony Gonsolin suffered the loss. He is the first pitcher to lose an All-Star Game in his home stadium since Roger Clemens lost in Houston in 2004.

–The American League has now won nine straight All-Star Games dating back to 2013. During the win streak, the AL All-Stars have outscored the National League 40-22.