All eyes on wild-card slot as Canucks visit Stars 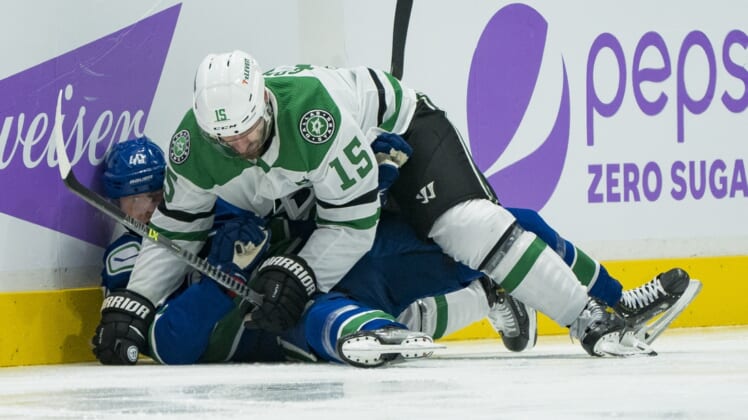 For a team chasing down a wild-card spot, the next game on the schedule is always the biggest.

But when the Vancouver Canucks visit the Dallas Stars on Saturday night, the stakes will be doubly important for both clubs.

The same night, Vancouver lost in Minnesota 3-2 in overtime, and sits with 71 points.

The brightest of the Stars against Carolina was their newest member — goaltender Scott Wedgewood, who was acquired March 20 from the Arizona Coyotes for a conditional 2023 fourth-round draft pick.

That deal by Dallas general manager Jim Nill looks fantastic so far for the Stars.

By posting 44 saves against Carolina, Wedgewood set a franchise record for a goalie’s debut. His denials of Vince Trocheck, Andrei Svechnikov and Tony DeAngelo made Tyler Seguin’s single marker stand up in the shootout, which gave the Stars the 4-3 win and a 1-point edge on Vegas in the wild-card race.

“He stole that game for us tonight, there’s no question,” Dallas coach Rick Bowness said of Wedgewood, 29, who broke the mark of 43 saves set by the Minnesota North Stars’ Jon Casey in 1984.

Jamie Benn put Dallas up with his 16th goal just 30 seconds into the second period. Roope Hintz scored twice to bring him to 28 tallies, second only to linemate Jason Robertson’s 31.

The Canucks beat Dallas 6-3 in Vancouver on Nov. 7 and will need similar showings over their final 16 games in order to make the postseason, especially considering the Stars have three games in hand.

After closing its seven-game homestand (2-3-2) with a 3-2 overtime loss Sunday against the lowly Buffalo Sabres, the Canucks opened their four-game road trip with a strong 3-1 victory Wednesday in Colorado.

In the rebound win, stellar play in goal by backup Jaroslav Halak helped coach Bruce Boudreau’s team start the road trip right. The 36-year-old Halak starred in the victory, turning aside 32 of 33 shots by Colorado.

With regular starter Thatcher Demko third in games played by goalies (53), reliable outings by Halak could keep the No. 1 backstop fresher down the stretch.

The 16-year-veteran stood strong late in the 2-1 clash, making a crucial glove save on Mikko Rantanen with 31 seconds to play — his final stop — before Bo Horvat’s empty-net tally rang up two points.

The victory ended Vancouver’s three-game skid. However, Thursday night, the Canucks squandered an early lead and needed a third-period power-play goal by J.T. Miller just to get to overtime.

Then just a few moments after Miller clanged a shot off the far post in the opening seconds of overtime, the Wild’s Joel Eriksson Ek beat Demko on a breakaway. Demko was playing for the 20th time in the past 21 games (10-5-4).

“Obviously at this stage of the season, you need those other points,” Boudreau said. “But I can’t be unhappy with the fact that we got one point.”

Miller scored his team-leading 27th goal. Horvat, who has 11 goals and six assists in the past 15 games, netted his 25th marker.