All eyes on Shohei Ohtani in Angels-Mariners clash 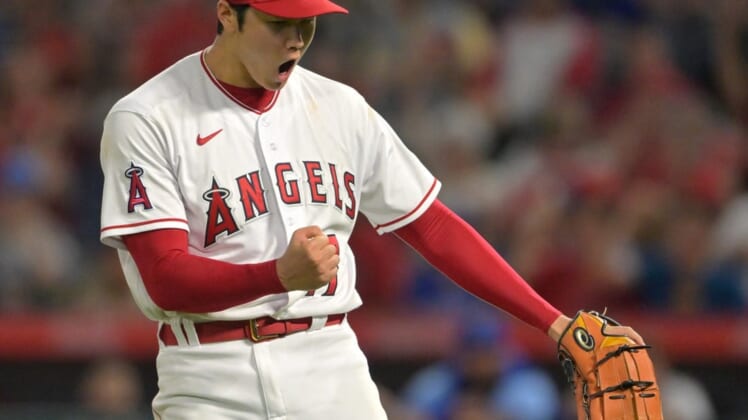 Shohei Ohtani won’t be on the mound but he will be in the lineup as the designated hitter when the Los Angeles Angels host the Seattle Mariners on Friday night in Anaheim, Calif.

All eyes will be on the two-way player to see what he might do for an encore.

On Tuesday, the reigning American League MVP hit two home runs and had a career-high eight RBIs. Then on Wednesday, he shut out the Kansas City Royals for eight innings on two hits, striking out a career-high 13 batters and walking only one.

“Watching it every day, you think you get used to the greatness but there’s a lot of things involved with him,” Angels interim manager Phil Nevin said. “Just the way his mind is in the game. He’s aware of everything. He’s incredible. To see what he does on a baseball field, it’s fun to be a part of every day.”

Angels center fielder Mike Trout is expected back in the lineup after not playing in Wednesday’s game. Trout had played in all but three innings since returning from a groin strain on June 11 before getting the day off Wednesday.

Last Friday in Seattle, Lorenzen gave up seven runs on seven hits and three walks in five innings. It was his only career start against the Mariners.

The Mariners will throw right-hander Chris Flexen (2-8, 4.23 ERA), who will make his 14th start of the season. Flexen is winless in four starts in June but hasn’t pitched all that poorly. He gave up two runs in each of his last three starts over 17 innings.

The status of Ty France is not known after the Mariners first baseman appeared to injure his left arm in a collision with Oakland’s Sheldon Neuse on a play at first base in Thursday’s 2-1 win over the A’s. France had to leave the game.

Losing France would be a blow to the Mariners considering he has been the most consistent hitter on a team that ranks 11th of 15 teams in runs scored in the AL.

“I think right now guys are just trying to do too much,” France said. “We haven’t been scoring many runs lately, so when we get those opportunities, I think we’re really trying to capitalize on it and just maybe putting too much pressure on ourselves and just not getting the job done right now.”