All eyes on Auston Matthews as Leafs host Canadiens 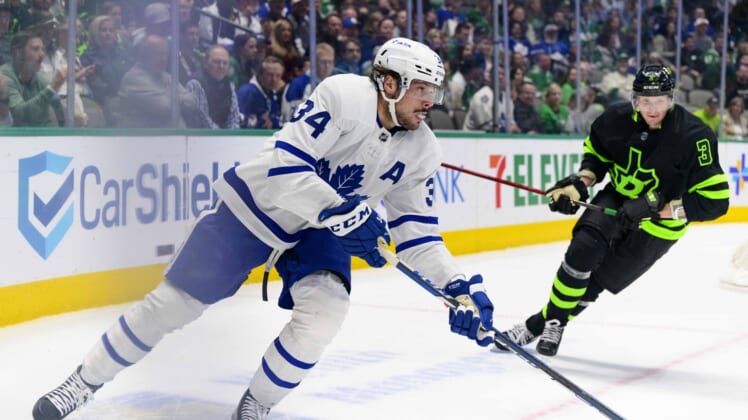 The Toronto Maple Leafs will aim to stay hot and tighten their hold on second place in the Atlantic Division when they host the Montreal Canadiens on Saturday.

“The playoffs is the most important time of the year,” coach Sheldon Keefe said. “But this is an important time right now. We’re trying to solidify ourselves first for the playoffs, and then in the standings for seeding.”

“The names that have come before us, just to be in the same breath as some of these guys, it’s extremely humbling,” Matthews said. “It’s a big honor. This feels really nice, but we’re working towards something bigger than this. It’s a nice stepping stone, but there’s work to be done.”

Matthews has been on a tear since late November, scoring 49 goals in 49 games since then. On Saturday, he can reach the 50-in-50 mark against Montreal, with whom the legendary Maurice Richard became the first in NHL history to accomplish the feat.

Mitch Marner also continues to pile up the points, adding an assist to extend his point streak to 12 games. He has 27 points (eight goals, 19 assists) during that stretch, which includes nine multi-point games.

The Canadiens (20-40-11, 51 points) are looking to build off a 7-4 win against the New Jersey Devils on Thursday. While the Canadiens have cooled off after a hot start under interim coach Martin St. Louis — they’re 4-5-3 in their past 12 games — the team is still digging in each night.

“I like the wolf-pack mentality,” defenseman Chris Wideman said. “One’s in, we’re all in. I think you started to see that a little bit. I’ve said it before: we’re a group that really enjoys each other, and regardless of the standings we’re sticking up for each other and playing hard every night.”

Cole Caufield continues to flourish under St. Louis, adding another tally to his total against the Devils. Caufield has scored 16 of his 17 goals this season in 26 games since St. Louis took over.

“When he plays with a swagger and confidence, he’s a lot of fun to watch, a lot of fun to play with,” forward Nick Suzuki said. “He’s going to be a big part of the team in the future, and when he’s playing like that he’s tough to stop.”

Defenseman Jeff Petry is a possibility to return against the Maple Leafs, St. Louis said. He’s missed seven games with a lower-body injury. Goalie Carey Price practiced with the team on Friday but will not dress.