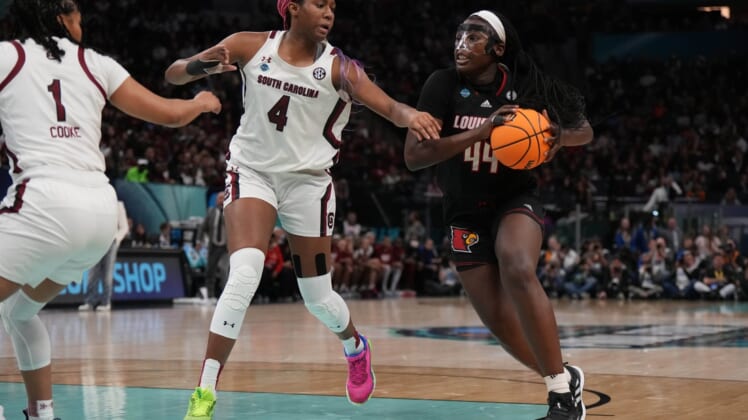 MINNEAPOLIS — Aliyah Boston had 23 points and 18 rebounds to pace South Carolina to a 72-59 victory over Louisville on Friday night in the first semifinal at the women’s Final Four.

South Carolina (34-2), the top overall seed in the tournament, will face either defending champion Stanford (32-3) or UConn (29-5), winner of 11 national titles, in the title game Sunday night at Target Center.

Boston, the Naismith National Player of the Year and Defensive Player of the Year, hit 8 of 12 shots and 6 of 7 free throws. The 6-5 junior punctuated her performance with her only 3-pointer make it 68-54 with 3:12 left.

Brea Beal added 12 points and Destanni Henderson 11 for the Gamecocks, who lost to Stanford, 66-65, in the national semifinals last season. South Carolina won its only national title in 2017.

Emily Engstler had 18 points and nine rebounds for Louisville (29-5) before fouling out with 4:56 remaining. Hailey Van Lith, who scored at least 20 points in each of the first four tournament games, was held to nine points on 4-of-11 shooting.

South Carolina gained control with runs on each side of the half. The Gamecocks closed the second quarter with a 10-4 run for a 34-28 lead, then opened the third period with a 10-2 spurt. Victaria Saxton hit two free throws to put South Carolina up 44-30.

After going 2 of 9 from beyond the arc in the first two quarters, the Gamecocks hit their first three attempts from deep in the third quarter, pushing the lead to 51-36 on Henderson’s 3-pointer.

The Cardinals scored six straight to pull within 54-48, but Boston converted a three-point play with 4.2 seconds left as Engstler picked up her fourth foul.

South Carolina threatened to pull away early in the second quarter, but Louisville erased a 19-10 deficit with a 12-0 run.

After being outrebounded 9-1 in opening minutes, Louisville battled back to even the rebound count at 19-19 at the half and held a 10-2 advantage in second-chance points.