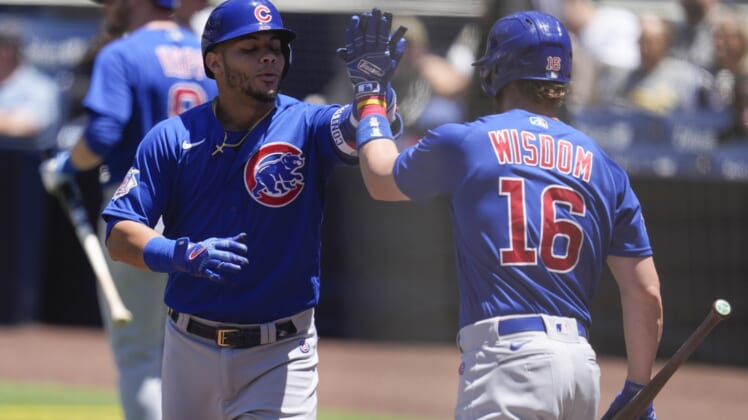 Alfonso Rivas broke a 5-5 tie with a two-run single in the top of the eighth inning Wednesday afternoon to lead the visiting Chicago Cubs to a 7-5 victory over the San Diego Padres in the rubber match of a three-game series.

The Cubs loaded the bases with no one out in the eighth against Padres reliever Luis Garcia on singles by Wilson Contreras and Patrick Wisdom around a walk to Ian Happ. Rivas followed with a line drive to center to score Contreras and Happ.

The Padres had battled back from a 5-2 deficit to tie the game on a bases-loaded, catcher’s interference call against Contreras in the sixth and a pair of seventh-inning solo homers by Eric Hosmer and Luke Voit. Voit also homered in the second inning to give the Padres a 2-1 lead.

The Cubs had taken a 5-2 lead with a four-run fourth against Padres starter Nick Martinez, the big hit being a tie-breaking, two-run double by Frank Schwindel.

Contreras, who homered in the first to give the Cubs a quick 1-0 lead, drew a walk to open the fourth inning, moved to second on a wild pitch and scored on a one-out single by Wisdom. Rivas drew a walk before Martinez struck out Ildemaro Vargas for the second out. But Schwindel followed with double to the wall in center on the 11th pitch of his at-bat to make it 4-2. Jason Heyward then singled home Schwindel.

Voit’s homers were his first two of the season and landed in almost the same spot in the left field stands. The former Yankee came off the injured list Tuesday and was hitting .136 before the first homer.

Mychal Givens (2-0) was credited with the win, with Rowan Wick working two scoreless innings to earn his second save as the Cubs won only their second series of the season. Garcia (0-2) took the loss.

Cubs shortstop Nico Hoerner left the game in the second inning after injuring his right ankle in a collision with second base umpire Dan Iassogna on a defensive play in the first. Hoerner collided with the umpire when Hoerner ran to center field to take a throw from Heyward after the Padres’ Jurickson Profar tripled. Hoerner stayed in the game and struck out in the second before being replaced by Vargas in the bottom of the inning.

During the game, the Padres announced that manager Bob Melvin had successful prostate surgery Wednesday morning and is expected to make a full recovery.