Aug 24, 2021; New York City, New York, USA; German tennis player Alexander Zverev poses for a photo on the field before a game between the New York Mets and the San Francisco Giants at Citi Field. Zverev is in New York for the U.S. Open, which begins on Monday. Mandatory Credit: Brad Penner-USA TODAY Sports

World No. 4 Alexander Zverev is once again denying allegations of domestic violence from a former partner on the cusp of the U.S. Open in New York.

Zverev issued a statement Friday to refute the latest round of allegations made by Olga Sharypova, which were published Wednesday by Slate. Sharypova, who first accused Zverev of abuse last October, said she feared for her life with Zverev but stayed with him at first at the urging of a friend who thought the couple could live happily ever after.

Among her initial charges last October was that Zverev attempted to strangle her with a pillow and hit her head against the wall in a hotel room days before the 2019 U.S. Open. 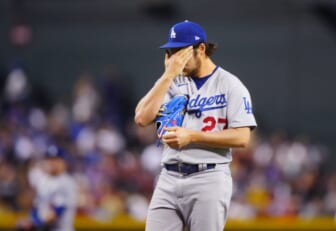 In Wednesday’s article, she expounded on the pattern of being abused and detailed incidents that she said happened at tournaments at Geneva and Shanghai. Sharypova said she was beaten while naked by Zverev in the hotel in Shanghai after a dispute.

Zverev, 24, said in a statement on Friday that he has begun taking legal action against Sharypova and Ben Rothenberg, who wrote the article for Slate.

“I have engaged my German and American lawyers in the matter,” Zverev said in a statement on his Twitter account. “They have already obtained a preliminary injunction against the source and the author who published the false allegations. …

“I categorically and unequivocally deny having abused Olya. I also fully support the creation of an ATP domestic violence policy. I will not address this matter any further.”

Slate released a statement saying it stands by its story.

“Today we were informed that Alexander Zverev started legal proceedings in Germany against Slate following our report on alleged domestic abuse,” the statement said. “Though Slate does not comment on pending litigation, we stand by our fair and accurate reporting based on multiple sources and interviews.”

Referencing her allegations of abuse in Shanghai in October 2019, the 24-year-old Sharypova told Slate that Zverev attacked her “more violently” than ever before. She described being grabbed by her throat, pushed up against the bathroom wall and being punched hard. She said she tried to fight back.

“I was just trying to protect myself,” she told the publication. “I’m already naked. I’m a woman, I don’t have much power. And after my shower, I don’t have time to get my clothes. I don’t feel safe for one second.”

Sharypova, who is Russian, now lives in Moscow.

Zverev, who hails from Germany, has won 17 career titles after beating Greek Stefanos Tsitsipas in the Western & Southern final last weekend. He came close to winning the U.S. Open last year as he won the first two sets against Austria’s Dominic Thiem before losing the final three.

Zverev won the gold medal in singles at the recent Tokyo Olympics.

Zverev, the No. 4 seed at the U.S. Open, faces American Sam Querrey in the first round on Tuesday.

Last Saturday, the ATP announced it would begin a review of its policies regarding abuse. To this point, the ATP has waited for the outcome of legal procedures before taking any action under the tour’s code of conduct but is studying potential policy changes.

“Abuse has a profound and lasting impact on millions of victims each year. We believe everyone in tennis should feel protected, fairly represented, and supported in raising concerns,” said Massimo Calvelli, ATP’s CEO, in a statement. “When abusive conduct or allegations are related to any member of the tennis family it can also impact the public’s trust in our sport. We recognize that we have a responsibility to be doing more.

“This represents new ground for us, and the seriousness and complexity of these issues will require us to proceed with care. We have to be sure that any policies are practical and enforceable across our sport, which operates in more than 30 different legal jurisdictions and where players compete as independent contractors. Collaboration with the WTA, ITF and the four Grand Slams will also be important in order to serve the wider tennis community.”