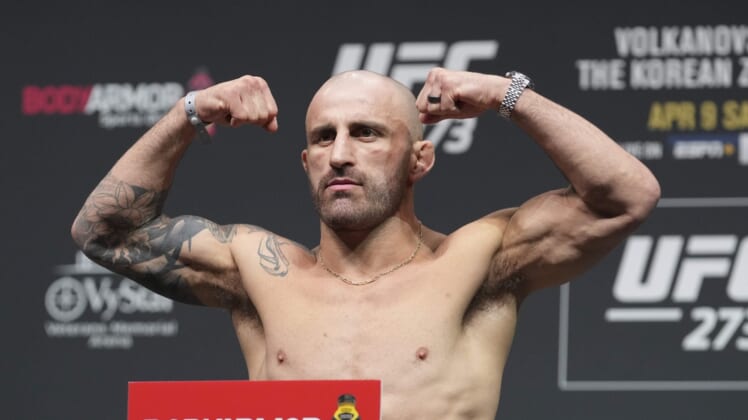 UFC featherweight champion Alexander Volkanovski is at the top of his game, a plain fact he demonstrated again on Saturday night.

The Australian made it look easy while successfully defending his title against South Korea’s Chan Sung Jung in the main event of UFC 273, earning a TKO victory at the 45-second mark of the fourth round in Jacksonville, Fla.

Volkanovski’s striking was crisp and pinpoint from the jump. He nearly finished Jung, a competitor nicknamed “The Korean Zombie” for his toughness, in the third, but Jung was saved by the horn. In the fourth, Volkanovski poured it on and the bout was waved off with Jung still standing.

Volkanovski (24-1) has now won all 11 of his UFC fights and successfully defended his title three times. Jung dropped to 17-7.

“He took a lot more (punishment) than I wanted him to,” Vokanovski said. “I was starting to feel bad about it, but that’s the sport we’re in.”

In the evening’s co-feature bout, Long Island, N.Y.’s Aljamain Sterling (21-3) got the last laugh on his many, many doubters by defeating Russia’s Petr Yan (16-3) in a UFC bantamweight title unifier.

Last year, Sterling became the first fighter ever to win a title in UFC via disqualification when Yan fouled Sterling in a bout Yan was otherwise winning handily. Sterling was a huge underdog going into the rematch and the Florida crowd sided with the Russian, but Sterling took the victory via split decision, getting two out of three 48-47 scorecards to go in his favor.

Sterling used his grappling skills to decisively take rounds two and three, nearly cinching submissions on multiple occasions. Yan plainly took rounds four and five with his striking game. The determining factor was a close round one, and Sterling got the nod from two of three judges there and thus the fight.

“I know I came in here very highly doubted,” Sterling said. “I had a tough-ass opponent in Petr Yan. He brought out the best in me. … Keep doubting me.”