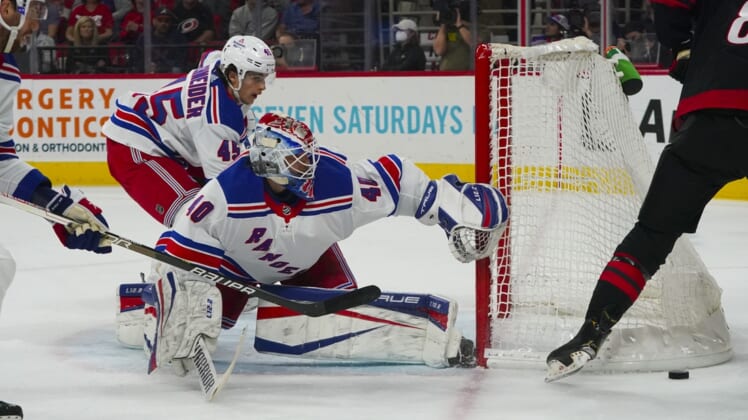 Alexandar Georgiev made 44 saves for his first shutout of the season as the New York Rangers beat the Carolina Hurricanes 2-0 on Sunday night in Raleigh, N.C.

Chris Kreider scored in the second period and Frank Vatrano had an empty-net tally with 41.3 seconds to play for the Rangers.

Hurricanes goalie Frederik Andersen made 16 saves, but Carolina now has its first four-game losing streak of the season. It is 0-3-1 during that stretch.

Sunday marked Georgiev’s seventh career shutout. It had been more than a year — March 17, 2021 — since his last one.

The Hurricanes were shutout victims for the third time this season. They were consistent in terms of scoring chances, with 14 shots in the first period and 15 shots in each of the next two periods.

Georgiev, New York’s No. 2 goalie for most of the season, earned his first victory against a team other than Anaheim since Jan. 3. It also marked his biggest save total of the season.

It was the second significant result for the Rangers in less than 24 hours following a 2-1 triumph Saturday night at Tampa Bay.

Kreider scored with 4:21 remaining in the second period for his team-leading 41st goal of the season. He has a goal in three of the last four games.

Jacob Trouba and Alexis Lafreniere assisted on the goal.

New York managed just three shots on goal in the first period and seven more in the second. By then, the Hurricanes held a 29-10 advantage in shots going into the third period.

The Hurricanes were without right winger Nino Niederreiter, who was serving a one-game suspension because of a slashing infraction two nights earlier against the Washington Capitals.

Carolina had defenseman Tony DeAngelo back in action after an 11-game absence with an upper-body injury.