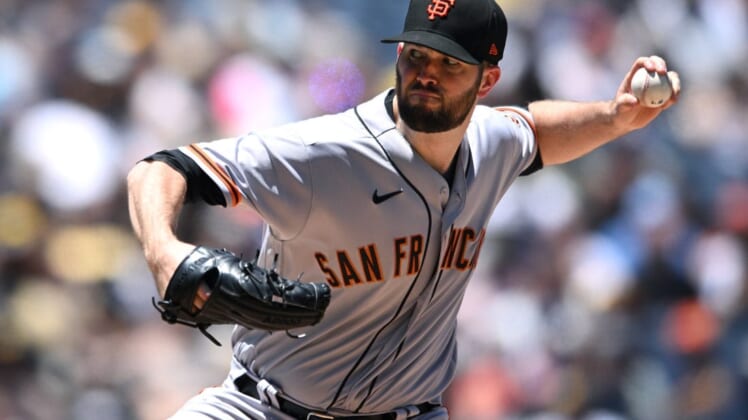 Alex Wood no-hit the Padres for five innings and Thairo Estrada and Wilmer Flores hit early two-run homers Sunday afternoon as the visiting San Francisco Giants routed the Padres 12-0 for a second straight win and a split of a four-game series.

Flores, who hit a game-winning homer for the Giants Saturday, was 4-for-6 in the game with two homers and four RBI. His second homer came off Padres’ infielder Matthew Batten in the ninth. He has 12 homers on the season — three in the last two games.

The Giants jumped on Padres starter MacKenzie Gore (4-4) for eight runs on eight hits and a walk in just 3 1/3 innings.

The first time Wood and Gore were matched on May 22 in San Francisco, the Padres prevailed 10-1. Wood gave up five runs on eight hits in three innings in that game while Gore gave up a run on three hits over six innings.

The results were just the opposite Sunday.

Estrada put the Giants on the board with a two-run homer following a Darin Ruf single leading off the second. An inning later, Austin Slater doubled to open the inning and Flores homered. The homer was Estrada’s seventh.

The Giants then scored four times in the fourth off Gore.

David Villar opened the inning with a single, advanced to second on a ground out and scored on Austin Wynns’ single. Mike Yastrzemski followed with a RBI triple and scored on Austin Slater’s single. Back-to-back singles by Flores and pinch-hitter Luis Gonzalez off reliever Tayler Scott closed the book on Gore.

The Giants added two runs in the seventh on a single by Mike Yastremski and an infield out by Flores and single runs in the eighth (a Joey Bart RBI) and ninth (Flores’ second homer) to finish with 12 runs on 17 hits.

The Padres first hit was a line drive single to left by C.J. Abrams leading off the sixth.