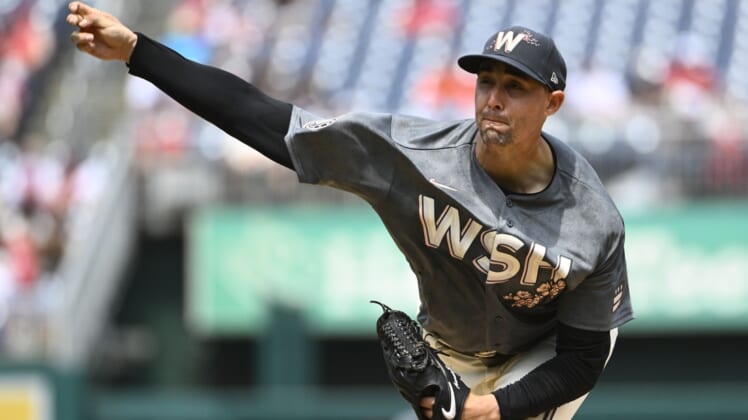 Wood (2-0) allowed two runs on four hits over five innings. He walked one and struck out five. His career ERA at Nationals Park actually rose to 2.86, still good for second behind Jacob deGrom (2.80) among all active pitchers with 40 or more innings at the stadium.

Wilmer Flores had a double and a single for the Giants.

Camilo Doval pitched the ninth for his third save.

Former Giant Aaron Sanchez (0-1) was called up from Triple-A Rochester to make the start for Washington. He gave up four runs on six hits over 4 1/3 innings.

Nationals first baseman Josh Bell left the game after two innings. Bell walked to start the bottom of the second and ended the inning on third base. Bell left a game earlier in the week with left knee tightness.

The Giants got to Sanchez for a run in the first. With two outs, Darin Ruf walked and went to third on Joc Pederson’s single. Brandon Crawford, who had three hits on Friday night, followed with an RBI single to make it 1-0.

Sanchez then retired nine straight batters before Flores doubled to right leading off the fifth. Thairo Estrada followed with an infield single off Sanchez’s foot and Luis Gonzalez followed with a sacrifice fly for his first Major League RBI. Estrada then stole second and scored the Giants third run when Curt Casali singled to right center.

That was all for Sanchez as Sam Clay came to face pinch hitter Austin Slater, who singled. After Brandon Belt was hit by a pitch to load the bases, Ruf grounded into a force play at second, scoring Casali, and Pederson’s RBI-single thru the shortstop spot vacated by a shift made it 5-0.

Adams homered with two outs in the fifth to make it 5-1. Victor Robles doubled and scored on a Lane Thomas single, but Wood struck out Juan Soto.