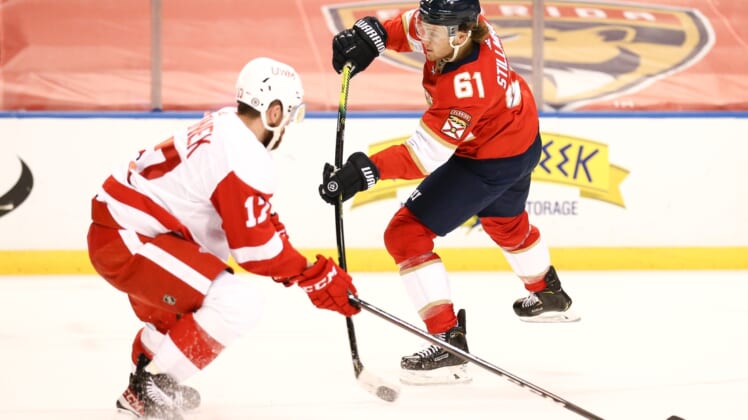 Alex Wennberg scored less than 90 seconds into overtime and Chris Driedger made 25 saves as the Florida Panthers beat the Detroit Red Wings 3-2 in Sunrise, Fla., on Thursday night.

The Panthers, tied with Tampa Bay atop the NHL’s Central Division standings, have won four consecutive games after sweeping their past two series against Dallas and Detroit.

Florida also closed out its eight-game season series and won six of eight against the Red Wings. Columbus visits the Panthers this weekend; Detroit travels to Tampa Bay.

Detroit goalie Thomas Greiss made 33 saves in the loss.

Greiss held a 2-1 lead in the third after Anthony Mantha scored his 10th goal of the season at 6:07 of the period.

Florida tied it at 10:39 on a power play goal from Frank Vatrano, his 11th of the season.

That was the only power play goal Detroit gave up as the Panthers went 1-for-4 with the man advantage. The Red Wings were 0-for-2 on the power play.

Tied at 2 going into the extra frame, Florida kept the puck in the Detroit zone for the entirety, with Wennberg netting the game-winner off a pass from Gustav Forsling.

Florida came out quickly, getting three scoring chances in the opening minutes of the game.

But it was the Red Wings who struck first as Adam Erne’s 40-foot slap shot sailed above goalie Driedger’s head at 4:21 of the first.

The Panthers eventually tied it and the score was 1-1 at the first intermission. Noel Acciari got the Florida goal at 11:55, chopping at a loose puck left by Carter Verhaeghe.

At Thursday’s morning skate, the Panthers got some good news as captain Aleksander Barkov and second-line forward Patric Hornqvist both practiced.

Although neither player went Thursday, coach Joel Quenneville said both players (Hornqvist is eligible to come off IR Friday) should be play Saturday against visiting Columbus.