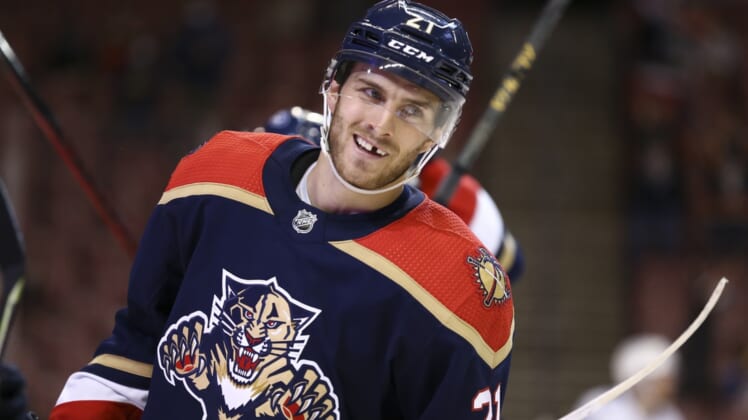 Alex Wennberg scored three goals to lead the Florida Panthers to a 5-1 victory over the visiting Tampa Bay Lightning in Sunrise, Fla., on Saturday night.

It appears the two in-state rivals already do not like each other. A combined 146 minutes of penalty time and six misconduct penalties were handed out as the two teams fought throughout the game.

Florida opened to a 1-0 lead on Wennberg’s first goal at 11:44 of the first period. It was his 14th goal of the season, setting a career high. He added to that as the game wore on. Wennberg would later give the Panthers leads of 3-1 and 5-1.

Tampa Bay fell behind 2-0 when Sam Bennett scored on a power play chance at 3:07 of the second.

Luke Schenn helped the Lightning cut into the deficit less than two minutes later by scoring off a pass from Yanni Gourde.

The rest of the second period belonged the Panthers as Wennberg scored to give Florida its two-goal lead back. Jonathan Huberdeau made it a three-goal lead at 14:53 of the second.

Florida goalie Sergei Bobrovsky ran his record to 3-2 against the Lightning this season as he stopped 28 shots for the win.

The Lightning were playing without three of their top defenseman as Victor Hedman, Ryan McDonagh and Jan Ratta took the night off after playing against Dallas the night before.

Florida coach Joel Quenneville had Bennett back in the lineup after missing Monday’s game. The Panthers did hold out Patric Hornqvist and Carter Verhaeghe another day.