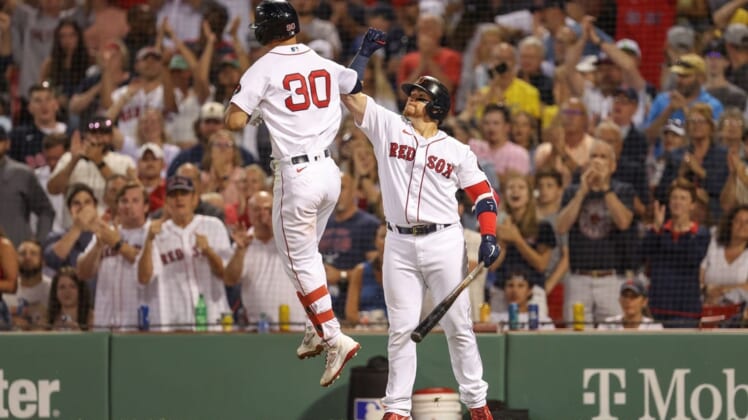 Alex Verdugo drove in a run to forge a tie in the eighth inning and ripped a two-run single in the 10th to rally the host Boston Red Sox to a 6-5 victory over the New York Yankees on Saturday.

Staked to a 5-3 lead, Wandy Peralta (2-2) allowed a single by former Yankees farmhand Rob Refsnyder to put runners on the corners. Jeter Downs recorded his first career hit with an RBI single to halve the deficit, and Yankees third baseman Josh Donaldson bobbled a grounder that spoiled a chance at a game-ending double play.

Verdugo made the Yankees pay with a hard-hit liner to right field, allowing Refsnyder and Downs to score to end Boston’s four-game losing skid.

New York claimed the advantage in the top of the 10th, as Aaron Judge greeted Jake Diekman (4-0) by sending a liner into center field to plate ghost runner Jose Trevino. Judge advanced to third base on a groundout and came around to score on Anthony Rizzo’s second RBI double of the night.

With the game tied at 1-1, Ryan Brasier relieved rookie Kutter Crawford to start the sixth inning and promptly surrendered a single to Gleyber Torres.

Rizzo followed with a line drive to center field that sailed under the glove of a diving Jarren Duran, allowing Torres to score. Rizzo didn’t stay on second base for long, as Donaldson brought him home with a single to center field.

Refsnyder trimmed the deficit in the sixth inning by sending a first-pitch cutter from starter Jordan Montgomery over the Green Monster. The homer was Refsnyder’s third of the season and first since June 28.

The Yankees evened things in the fifth inning after Aaron Hicks deposited an 0-2 changeup from Crawford over the wall in right-center field. The homer was Hicks’ sixth of the season and third in his last four games.