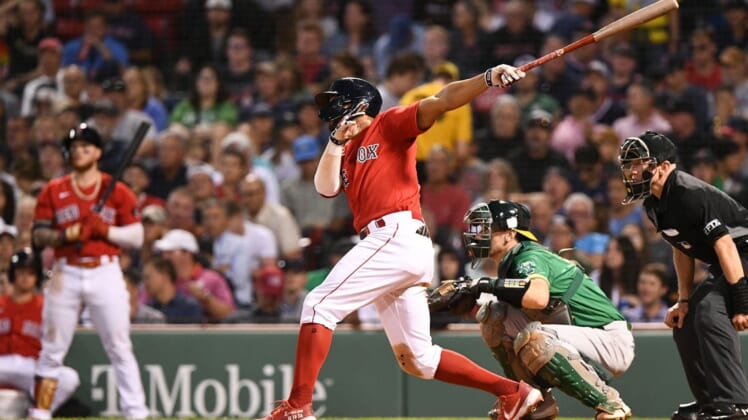 The Boston Red Sox continued their season-long dominance of the Oakland Athletics, logging 13 hits on the way to a 10-1 home win on Wednesday night.

Alex Verdugo and Xander Bogaerts had three hits apiece for Boston, which had won its previous four games against the Athletics, outscoring them 26-5 during that span.

Four consecutive run-scoring innings helped Boston jump out to a 6-0 lead that it would never relinquish.

Sean Murphy went 2-for-4 and Matt Davidson homered to drive in the lone run for Oakland.

In the opening frame, a pair of one-out walks and a Bogaerts single to left led to Devers scoring on an RBI groundout from Verdugo.

Devers made it a 3-0 game with a two-run shot into the right-centerfield bullpen in the second.

Oakland starter James Kaprielian (0-4) was chased from the game during a two-run fourth. Bogarts drove home the fifth Boston tally on a sacrifice fly before Verdugo and Trevor Story each tallied hits, the latter of which produced another run.

Kaprielian, who is in the midst of the longest losing streak of his career, issued six walks and allowed six runs, five of which were earned, on seven hits in 3 2/3 innings. He struck out two.

Oakland finally got on the board in the sixth inning with Davidson’s solo homer, but Verdugo’s first home run since April 16 in the bottom half of the frame allowed Boston to establish a seven-run cushion.