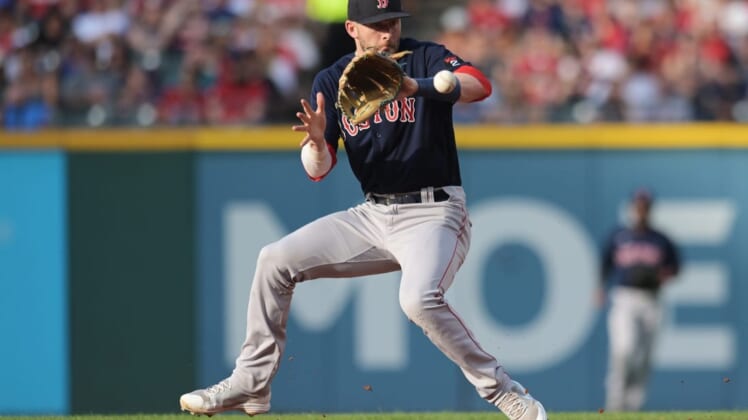 Left fielder Alex Verdugo belted a three-run homer in the sixth inning to break open a close game and lead the visiting Boston Red Sox to a 4-2 victory over the Cleveland Guardians on Saturday.

Cleveland starter Shane Bieber (3-4) was in complete command of the game and with two outs in the sixth, he quickly got J.D. Martinez in an 0-2 count.

That’s when the Red Sox came alive with three consecutive hits. Martinez and Xander Bogaerts singled before Verdugo pounced on a hanging curveball and drove it an estimated 447 feet for his fifth home run of the season.

It was the seventh homer allowed by Bieber and it handed Boston a 3-2 lead it never relinquished.

The Guardians, who have lost three in a row, snapped a scoreless tie with two runs in the third. Steven Kwan walked and scored on Amed Rosario’s league-leading fifth triple. He came to the plate on Jose Ramirez’s sacrifice fly, his 63rd RBI, for a 2-0 lead.

Boston looked to extend its one-run lead in the eighth when Jarren Duran and Rafael Devers singled and Martinez walked to load the bases with no outs against reliever Trevor Stephan. Stephan induced two groundouts and then struck out Trevor Story to end the potential uprising.

Duran, who was 4-for-5 with a double, drove in Bobby Dalbec for the Red Sox’s fourth run with a single in the ninth.

Closer Tanner Houck earned his sixth save with a scoreless ninth for Boston.