Alex Ovechkin ties ‘The Great One,’ but Stars defeat Capitals 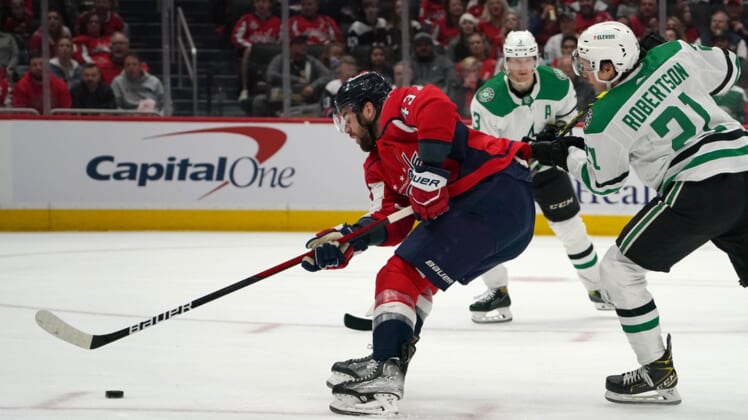 Roope Hintz scored two goals for the visiting Dallas Stars in a 3-2 win against the Washington Capitals on Sunday evening.

Alexander Radulov also scored, and Jake Oettinger made 36 saves in his second start in two days for the Stars, who had lost four of their previous five games.

Alex Ovechkin scored his 40th goal of the season for Washington, which was the 12th time Ovechkin has scored at least 40 goals in his NHL career, tying Wayne Gretzky for the NHL record. But the Capitals were denied in trying to win five in a row for the first time this season.

Vitek Vanecek made 20 saves for the Capitals, who also saw their eight-game point streak (7-0-1) come to an end.

Radulov gave the Stars a 1-0 lead at 2:17 of the first period. He pulled up in front of Vanecek and deflected Esa Lindell’s point shot into the net for his fourth goal of the season.

After killing two penalties, the Stars went on their only power play of the opening period when Martin Fehervary was called for tripping Marian Studenic at 17:17 and Hintz scored 40 seconds into the man-advantage for a 2-0 lead.

After three unsuccessful power plays, Ovechkin scored on the fourth to cut the lead to 2-1 at 4:53 of the second. Evgeny Kuznetsov recorded an assist on the play to stretch his point streak to a career-high nine games.

The Stars answered with another power-play goal by Hintz at 10:38 of the second period to make it 3-1.

Oettinger stopped Kuznetsov from point blank at 7:36 of the third period to maintain the two-goal lead, but Dmitry Orlov scored at 8:56 to make it 3-2.

Vanecek made a save on Jason Robertson with an outstretched left pad to keep it a one-goal game with 10:31 left.

The Capitals got one key player back against the Stars but remained without three others.

Lars Eller returned after missing three games while in COVID-19 protocol and played 12:25.