Alex Ovechkin sends Caps to victory in SO over Sabres 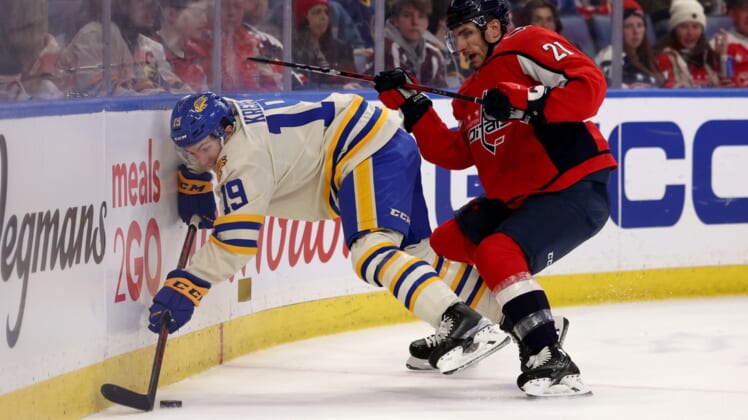 Alex Ovechkin scored his 41st goal of the season in regulation and added the shootout winner for the visiting Washington Capitals in a 4-3 victory against the Buffalo Sabres on Friday night.

Ovechkin ended the shootout with a backhander in the third round. Tage Thompson gave the Sabres a 1-0 lead in the first round and Evgeny Kuznetsov tied it in the second round.

Jeff Skinner scored twice for the Sabres, who had won three straight and five of six. Dustin Tokarski made 37 saves.

Ilya Samsonov made 20 saves for the Capitals, who had lost two straight but have now won four consecutive road games.

Kuznetsov had an assist in regulation for Washington to extend his career-best points streak to 11 games (14 points; seven goals, seven assists).

The Capitals took a 1-0 lead on a pretty passing sequence that ended with Nicklas Backstrom deking around a defender in the right circle and centering the puck to Anthony Mantha for the goal at 9:15 of the first period.

Skinner tied it at 15:49 when he gathered a loose puck in the offensive end and lifted a long backhand shot past Samsonov from the slot.

A short time after Samsonov stopped Skinner on a breakaway, Nick Jensen got a loose puck along the boards, skated into the right circle and fired a wrist shot through traffic to give the Capitals a 2-1 lead at 4:06 of the second period.

The Sabres tied it after an extensive stretch in the offensive zone.

Capitals defenseman John Carlson lost his helmet and had to skate off, giving the Sabres a brief 5-on-4 and Skinner converted from the right faceoff dot at 10:23 for his 26th goal of the season.

Casey Mittelstadt slid a pass across the crease to Victor Olofsson, who knocked it in to give the Sabres a 3-2 lead at 12:55, but Kuznetsov won a faceoff back to Ovechkin, who blasted a one-timer past Tokarski to tie it at 16:47.