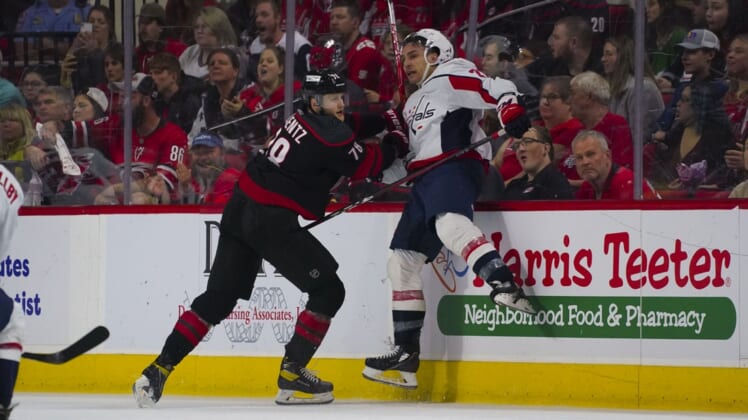 Evgeny Kuznetsov, John Carlson and Ovechkin scored in regulation for the Capitals, who pushed their points streak to eight games.

Seth Jarvis scored two goals and Vincent Trocheck had the other goal for the Hurricanes in regulation. Carolina goalie Antti Raanta made 37 saves.

Carolina’s home points streak increased to 14 games, just one away from tying the franchise record.

Washington outshot the Hurricanes 36-19 through regulation and then 4-1 in the extra session.

Jarvis opened the scoring at 5:17 of the opening period for his first goal in his last 19 games. He had been scratched in the three previous games.

Kuznetsov scored the Capitals’ first goal when most of the players appeared to be distracted by physical play in the corner. He collected the puck and rifled a tough-angled shot past Raanta for an unassisted goal.

A Washington turnover led to Trocheck’s one-timer from the slot for the tying goal at 7:06 of the second period.

Another strong forecheck by the Hurricanes resulted in the go-ahead goal by Jarvis with 12.4 seconds to play in the second period. He was set up by some crisp passing and knocked a shot in from the right side.

Ovechkin brought the Capitals even with 5:04 left in regulation, blasting in a shot after Nicklas Backstrom won a faceoff in the Carolina zone.

Ovechkin has a three-game goal streak and he has a total of seven goals in eight games this month.

Washington also won the first two meetings of the season between the teams and they’ll meet one more time in the regular season later this month.