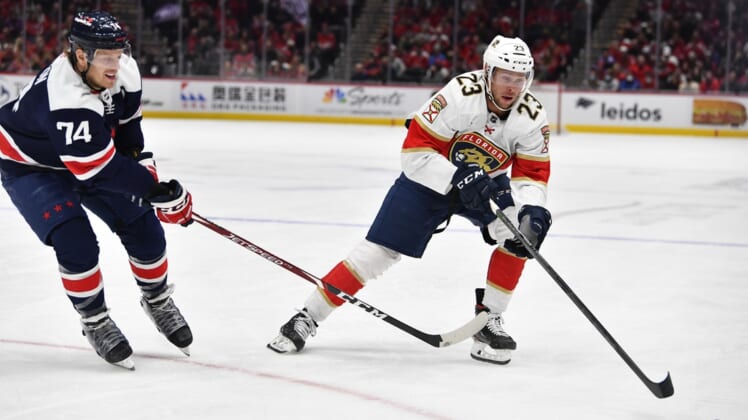 Alex Ovechkin capped his 28th career hat trick by scoring 4:02 into the third period to lead the host Washington Capitals to a 4-3 win over the Florida Panthers on Friday night.

Ovechkin, who upped his season total to 18 goals, scored on the left side on a rebound, from the right circle on the rush and in the slot. He has 273 career power-play goals, one shy of Dave Andreychuk’s NHL record.

Tom Wilson collected one goal and two assists and Evgeny Kuznetsov set up three tallies for the Capitals.

Florida was leading 1-0 early in the second period before the Capitals scored three goals in 2:12.

Due to a concussion scare with Sergei Bobrovsky, Florida made several goaltender changes within the first two periods. Bobrovsky absorbed a hit from Wilson and left the game after allowing two goals. Spencer Knight (six saves) relieved the netminder and allowed a quick goal, which is when Bobrovsky returned and finished with 19 saves.

After Reinhart’s goal with 6:49 expired in the second period, Bobrovsky was forced off the ice by the officials as part of the NHL’s concussion protocol. Bobrovsky returned for good with 2:48 remaining in the period.

The Panthers were without two of their top-six forwards: captain Aleksander Barkov (knee) and Anthony Duclair (undisclosed). This is the fourth straight game Barkov has missed, and Duclair was a late scratch.

Florida opened the scoring on Huberdeau’s breakaway goal with just 32 seconds left in the first period. After a Capitals turnover, Huberdeau made a move and used his backhand to shove the puck between Samsonov’s pads.

Washington scored a shorthanded goal 1:34 into the second. After a Kuznetsov steal, the Panthers got caught in a bad line change. Kuznetsov sent a stretch pass to John Carlson, who fed Wilson for the goal from the right circle. Wilson and Bobrovsky collided in the aftermath of the goal.

Ovechkin scored the next two goals to give Washington a 3-1 lead.

Ovechkin and Verhaeghe traded goals early in the third period, and the Capitals hung on from there.