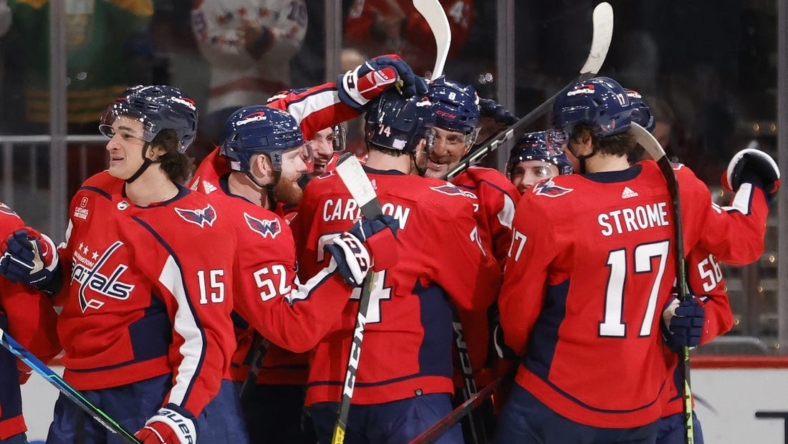 Alex Ovechkin is inching closer toward his 800th goal, and moving within 10 of the milestone was perhaps more significant for the psyche of his team, considering how things are going for the Washington Capitals lately.

After scoring a dramatic overtime goal on Wednesday, Ovechkin will attempt to give the Capitals their first winning streak in a month when they host the Calgary Flames on Friday afternoon.

Washington last won two in a row from Oct. 22-24 when it defeated the Los Angeles Kings and New Jersey Devils. Since then, the Capitals have posted a 4-7-3 record in their past 14 contests.

On Wednesday, Washington ended a four-game skid (0-3-1) when Ovechkin scored 64 seconds into overtime in a 3-2 win over the Philadelphia Flyers. It was his 790th goal, 10 shy of joining Hall of Famers Gordie Howe and Wayne Gretzky as the third player in NHL history with at least 800 goals.

“We just kept pushing and pushing,” Ovechkin said. “We (were) struggling, was in kind of a hard position, but it’s a good thing we battle through it.”

Ovechkin’s clutch goal off a pass from Dylan Strome capped a night in which the Capitals erased a pair of one-goal deficits. Washington was 2:58 away from a fifth straight loss when Sonny Milano scored the tying goal after it was nearly challenged for an offsides call.

Ovechkin also set up a power-play goal by Marcus Johansson and has 13 points in his past 11 games (seven goals, six assists) His power-play assist occurred after Johansson deflected the puck into the net.

“Kind of a gutsy win out there,” the returning T.J. Oshie said after skating on the second line with Milano and Evgeny Kuznetsov for most of Wednesday’s game.

Calgary dropped seven straight from Oct. 29 to Nov. 10 when it went 0-5-2 and lost five one-goal games. The Flames have rebounded by posting a 4-1-1 record.

The Flames are playing their fifth contest of a six-game trip that ends Saturday at the Carolina Hurricanes. So far, they are 2-1-1 after dropping a 2-1 decision to the Pittsburgh Penguins when backup goalie Dan Vladar allowed the game-winning goal to Evgeni Malkin in the fourth round of the shootout.

“I think we showed that we’re on the right track and we’ve been playing good hockey so far on this road trip.” Vladar said.

Dillon Dube scored the only goal and Mikael Backlund was unable to extend the shootout after Vladar allowed Malkin’s goal.

“Really good effort by our players,” Calgary coach Darryl Sutter said after his team dropped to 6-3-3 in one-goal games. “I’m proud of them.”

Vladar made 38 saves in his first start in nearly two weeks. It was the most shots allowed by the Flames this season and it is a figure that might have been more had the Flames not blocked 21 shots — including eight by defenseman Nikita Zadorov.

Washington is 5-0-1 in the past six meetings with the Flames, including a 5-4 victory in Calgary on March 8 when Ovechkin scored twice.