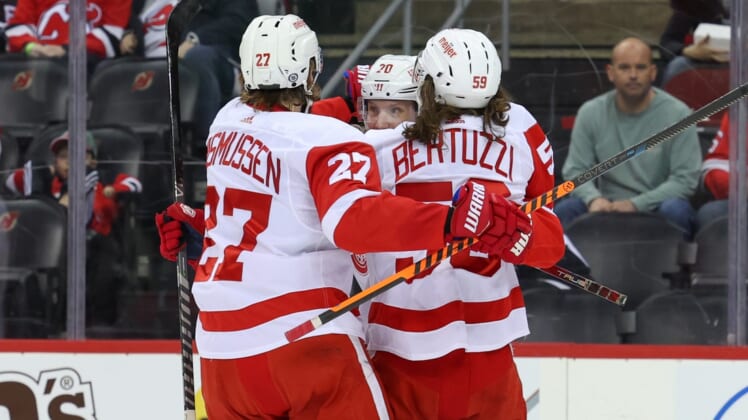 Alex Nedeljkovic made 17 saves for his fourth shutout of the season to lift the Detroit Red Wings to a 3-0 road win over the New Jersey Devils on Sunday afternoon in Newark, N.J.

The Red Wings took a 1-0 lead with 4:12 remaining in the first period on a goal by Oskar Sundqvist, who took advantage of a turnover by the Devils.

New Jersey’s Andreas Johnsson tried to bring the puck up the middle of the ice from deep in his own zone but lost control. Sundqvist ultimately fired a quick shot from the right faceoff circle that beat Hammond above his stick.

New Jersey pulled Hammond with 2:47 remaining but couldn’t generate possession in the Detroit zone off of a faceoff. The Red Wings worked it out of the zone and claimed a 2-0 lead with 2:09 left after Tyler Bertuzzi fired a shot from just beyond the New Jersey blue line into the empty net.

Michael Rasmussen added another empty-net goal on a backhand from near beyond the New Jersey blue line with 12.6 seconds remaining to round out the scoring.

Each team had an apparent goal overturned.

New Jersey thought it had tied the game late in the second period on a goal by Yegor Sharangovich, but the tally was overturned after a video review determined the Devils were offsides entering the zone.

Detroit thought it had made it 2-0 with 7:56 remaining in the game after a shot by defenseman Danny DeKeyser got through traffic and went past Hammond. Officials, however, ruled that Adam Erne bumped into Hammond while Erne was tangled up with New Jersey defenseman Ryan Graves.