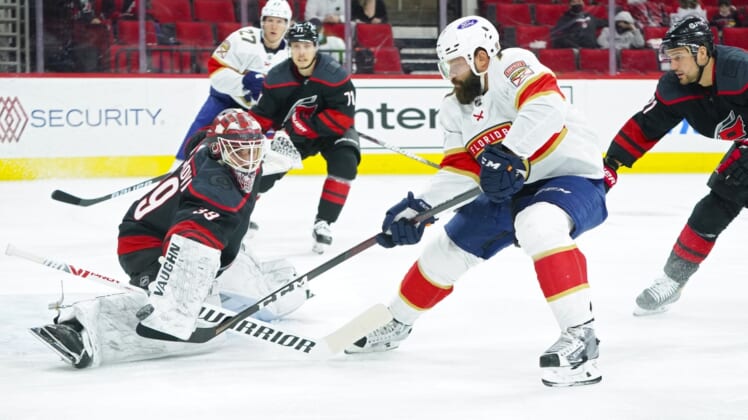 Sebastian Aho. Vincent Trocheck and Martin Necas scored goals and Alex Nedeljkovic posted a 24-save shutout as the Carolina Hurricanes beat the Florida Panthers 3-0 on Thursday night in Raleigh, N.C.

Nedeljkovic has three shutouts in his 20-game NHL career, all of them coming in his past 12 appearances. Necas and Trocheck each finished with two points.

The Panthers were shut out for the third time this season, each by a 3-0 score — to the Dallas Stars, Chicago Blackhawks and now Carolina.

By sweeping a two-game set this week, Carolina moved in front of Florida and Tampa Bay to claim first place in the Central Division. The Panthers and Lightning each have 56 points, one point before the Hurricanes’ total.

The Hurricanes are 5-0-1 this season against the Panthers.

Trocheck, who was traded from Florida to the Hurricanes in February 2020, has one goal in each of the team’s six games this season against the Panthers.

Carolina scored once in each period.

The Hurricanes scored just seven seconds into a first-period power play, winning the faceoff before Aho delivered the shot off a pass from Trocheck at 14:31. Aho has 300 career points in 349 games.

With the puck fluttering above the net in the second period, Florida center Eetu Luostarinen reached out to glove it. However, Carolina’s Nino Niederreiter appeared to bat Luostarinen’s arm, and the puck scraped off Driedger’s back and into the net. Trocheck was credited with the goal.

The Hurricanes had only six shots on goal in the third period, but one was Necas’ empty-net tally with 52 seconds remaining.

Florida was 0-for-4 on power plays while Carolina was 1-for-4.

The Hurricanes are 3-1-0 midway through a season-high, eight-game homestand.

Florida has gone consecutive games with regulation losses against the same opponent for just the second time this season, having fallen twice at Chicago in late March.