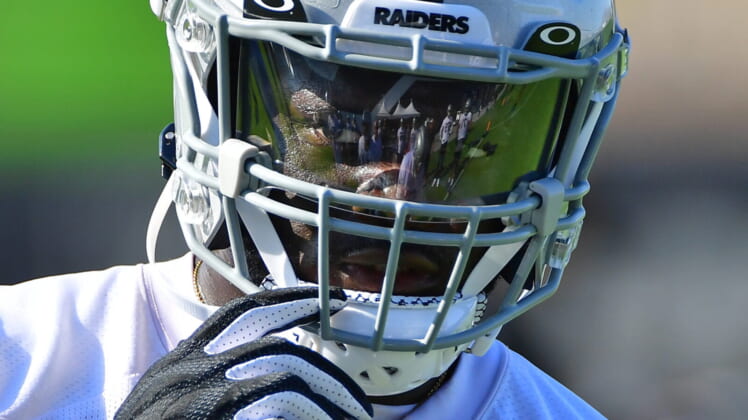 On Day 1 of the 2021 draft, the Las Vegas Raiders shocked many people with their pick, selecting Alex Leatherwood out of Alabama. Seven months later, critics have expressed strong opinions about how the Jon Gruden-Mike Mayock tandem messed up the selection.

In Week 5, the Raiders moved Leatherwood from right tackle to right guard, which raised some concerns. Initially, the rookie offensive lineman started to show a slight improvement on the interior as a run-blocker and pass protector. Still, he hasn’t put together a complete gem of a performance and continues to commit a ton of penalties. The rookie first-rounder has drawn infractions in nine out of 12 contests.

Already, the fanbase has begun to toss up its hands and prematurely call Alex Leatherwood a bust. While the Raiders have complicated his early development, let’s pump the brakes for a moment.

Some fans have revisited thoughts about offensive tackle Kolton Miller’s rough start to justify giving Leatherwood a chance to grow into his role. While the sentiment makes sense, this isn’t a good comparison to quell doubters who believe the Raiders made the wrong choice with their 2021 first-round selection.

While Miller and Leatherwood both struggled in pass protection throughout their rookie campaigns, the former suffered a Grade II MCL sprain and reaggravated the injury in his first year.

Miller had a decent start to his rookie term before he suffered a knee injury in Week 4 against the Cleveland Browns, allowing just five quarterback pressures (zero sacks) through his first three games, per PFF.

Alex Leatherwood doesn’t have a set position yet

Alex Leatherwood has to overcome a challenge that sometimes hurts players with versatility. The Raiders may have initially plugged him into the wrong position, which may be an ongoing conversation headed into the 2022 offseason.

Miller came into the league without any ambiguity about his role. No one argued that he would potentially play guard on the pro level. The UCLA product came out of the collegiate ranks as one of the most athletic tackles with experience on both sides of the line. At 6’9″, 309 pounds, he needed to add size (and he did during the 2019 offseason) to handle powerful bull-rushing edge-rushers.

Going into the 2021 draft, teams had to decide whether Leatherwood would fit on the offensive line as a tackle or guard. He had experience at right guard and left tackle, moved well in space and provided a physical presence to the Crimson Tide’s ground attack:

Whenever a player enters the league without a definitive position, he might go through an experimental period in which a team assesses his fit within a scheme. Where do his traits translate best?

From training camp up until now, Miller has played at left tackle. Alex Leatherwood’s role remains up in the air.

What’s next for Alex Leatherwood in 2022?

Alex Leatherwood has already switched positions, and the Raiders may move him back to right tackle next season, per The Athletic’s Vic Tafur.

While we can’t be certain of what the Raiders will do next spring given that they may have a new front office and coaching staff, the plan right now is to move Alex Leatherwood back to right tackle. The rookie had some growing pains at the position this season, but the main reason he was moved inside to guard was that offensive line coach Tom Cable didn’t like the fill-in guards.

Vegas may have a new general manager and coaching staff with a different outlook for Leatherwood’s career. He could go through more turbulence in his transition from the collegiate ranks to the pros.

Alex Leatherwood cannot control where he lines up. As a rookie, he will trust the coaches to put him in a position to fulfill his potential, but what if the Raiders made the wrong move?

The incoming coaching staff will re-evaluate Leatherwood’s fit in a new scheme, bringing more change. Miller didn’t have to switch positions and play under different coaches in his first two years.

The next phase of Leatherwood’s development hinges upon the vision of the Raiders’ new regime. The play-caller and offensive line coach must come in with a clear-cut plan for him and stick to it.

Though Cable deserves praise for his work with Miller, he may have had a false start with Leatherwood. Give him a chance to find his fit and groove in a stable setting.