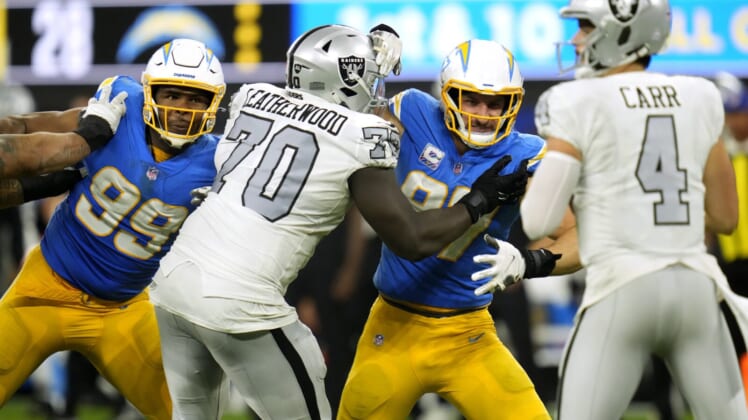 In today’s world, everything must happen now, and that applies to NFL player progression. Critics will use the bust label to a rookie who struggles coming out of college before he plays through half of his first season. Let’s pump the brakes on the notion that Alex Leatherwood is a wasted top-20 pick.

Leatherwood didn’t list as a consensus first-rounder in mock drafts, and he’s had a string of subpar performances, but the Las Vegas Raiders may have corrected a mistake and put him on the pathway to progress.

Through the first four weeks of the season, Leatherwood started at right tackle and allowed a ton of pressure while going against edge-rushers Justin Houston, T.J. Watt and Joey Bosa—three players with a double-digit sack season within the last two years.

While Leatherwood must work on his lower body mechanics, particularly his footwork to mirror edge-rushers and his tendency to move robotically with stiffness from the hips down, he can carve out a role on the interior.

Alex Leatherwood: learning on the job

First and foremost, Alex Leatherwood played right guard through his 2019 junior term at Alabama, using his massive frame to open lanes for a ground attack that averaged 168.7 rushing yards per game. Though athletic, he doesn’t always have quick feet, which may put him at a disadvantage against defenders who can consistently get off the line of scrimmage with a quick first step. However, the 6’5″, 312-pounder has enough reach and power to stalemate incoming pass-rushers with less explosive moves in their toolbox.

Based on that assessment, Alex Leatherwood should fare a lot better against defensive tackles rather than the agile but powerful edge-rushers coming into the league. All along, he projected as a possible tackle with a chance to transition to right guard if he struggles on the perimeter:

After a couple of starts at guard, Leatherwood briefly talked about why he felt comfortable at his new position.

“It’s definitely inside, so it’s not as much space,” Leatherwood said. “It’s a little bit slower up in there, so it naturally comes a little bit more easier.”

Alex Leatherwood isn’t going up against supreme athletes on the interior, so his lateral movement and reach could work in his favor while battling with 300-plus-pounders in the trenches.

In Week 6 against the Denver Broncos, Leatherwood had a bright moment when he sealed a block on Kenyan Drake’s 18-yard touchdown run. You’ll see him engage and move defensive end Shamar Stephen out of a gap, which allowed Drake to go untouched for a score. Also, give credit to center Andre James for walking linebacker Justin Strnad out of the frame:

On the bright side, Leatherwood allowed two quarterback pressures last week, per PFF, the fewest since Week 2 when he only played 47 percent of the snaps because of an oblique injury. Though the Alabama product has a long way to go to solidify a spot on the offensive line, he’s shown some progress, which is a good sign for a player who transitioned to another position with the season in progress.

Though plan A for Alex Leatherwood seems like it’s off the table, he can still provide substantial value for now.

The Raiders must balance their offensive attack with quarterback Derek Carr playing at a high level behind a shaky offensive line. Leatherwood’s move to right guard can bolster the ground game, which has generated the third-fewest yards leaguewide.

Coming off a torn ACL, guard Denzelle Good will turn 31 years old in March of 2022. No one knows how he’ll bounce back from a severe injury on the wrong side of 30. Depending on Leatherwood’s performances through the remainder of the season, he may show enough to claim the right guard spot for the long term.

Just because Alex Leatherwood isn’t the right tackle that the Raiders envisioned doesn’t mean he’s useless. Perhaps the coaching staff missed on their initial evaluation of him but lucked out because of his position flexibility.