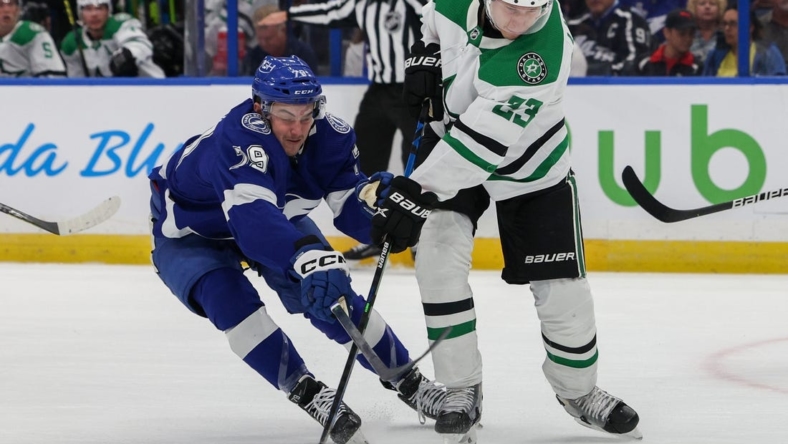 Alex Killorn’s goal on a two-on-one breakaway in overtime lifted the Tampa Lightning to their second straight win, a 5-4 decision over the visiting Dallas Stars on Tuesday night.

The deciding tally at 3:43 was set up on a breakout play from Steven Stamkos, who recorded his 500th career assist on the OT goal and broke a 10-game skid without a goal in the second period. Killorn finished with a goal and two assists.

Ross Colton, Nicholas Paul and Ian Cole each had a goal and an assist for the Lightning, who moved to 5-2-1 on home ice. Tampa Bay’s Brian Elliott stopped 28 shots.

Mason Marchment and Joe Pavelski notched power-play goals and Radek Faksa scored short-handed for the Stars, who are 1-2-1 in their past four games.

Dallas’ Jason Robertson tallied and had an assist while Roope Hintz had a helper — giving them both nine-game point streaks. Miro Heiskanen logged two assists, Pavelski also finished with two points, and Jake Oettinger made 33 saves.

Pavelski converted on a second-period power play his 430th goal, lifting him into sole possession of eighth place past Bill Guerin for all-time markers among U.S.-born skaters.

Colton put the Lightning ahead 1-0 inside the first two minutes. He found a rebound of Vladislav Namestnikov’s shot and popped in his fourth goal 80 seconds in.

After the game’s first penalty, Robertson floated in a long shot that was clipped by Marchment. The big forward’s deflection resulted in his fifth tally at 14:45.

On their first power play, the Lightning used strong wall work before Paul stick-lifted Hintz and stole the puck. Paul then zipped in his sixth tally at 4:47 of the second period for his club’s second lead.

On another Stars power play, Pavelski swiped a puck from Victor Hedman and whipped in his ninth goal. Then Robertson gave the visitors their first lead with his 11th tally 1:55 afterward to make it 3-2.

Stamkos evened the game at 3-all with a slight turn and chip of a pass from Cole. The marker at 14:23 of the second period was his team-leading eighth.

In the final frame, fancy stickhandling by Cole led to a rebound goal at 3:55 to put the Lightning out front, but Faksa stole the puck in the high slot and buried a short-handed goal at 15:18 to set up overtime.