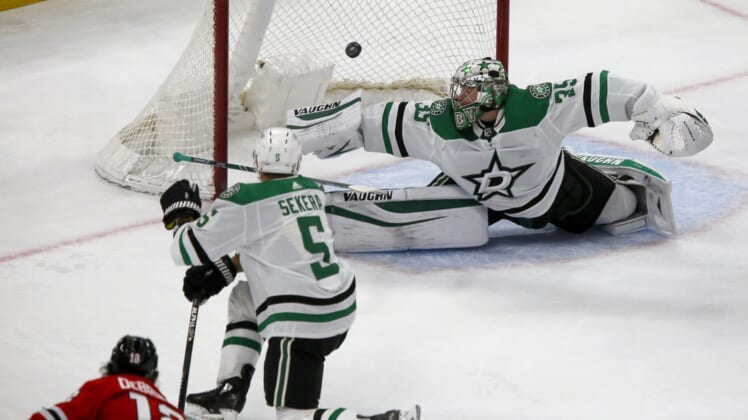 Alex DeBrincat eclipsed the 30-goal plateau with two tallies, Patrick Kane dished out a pair of assists and the Chicago Blackhawks welcomed back fans Sunday night for the first time in over a year with a 4-2 win over the Dallas Stars.

By scoring twice — six total against Dallas this season — DeBrincat extended his point streak to seven games and his career-long goal streak to six, with eight tallies in that span for Chicago (24-25-6, 54 points).

Kane’s two helpers give him 51 — second only to Edmonton’s Connor McDavid’s 68 — and eight points (one goal, seven assists) against Dallas in seven games.

Brandon Hagel posted a goal and an assist, MacKenzie Entwistle netted his first NHL goal and Kevin Lankinen registered 37 saves for the Blackhawks, who are 5-2-0 against Dallas.

Winners just once in their past seven games (1-4-2) as their chances for a playoff berth slipped away from them, the Stars (22-19-14, 58 points) got markers from Denis Gurianov and Mark Pysyk and 21 saves on 25 shots by netminder Anton Khudobin.

After 426 days without fans in attendance, Chicago’s United Center was finally open to 3,820 Blackhawks faithful — the last U.S-based NHL arena to allow fans inside.

Entwistle became the third Blackhawk to score his first NHL goal this week — joining Riley Stillman and Mike Hardman — getting a primary assist from Hardman at 6:23 of the first period.

Eliminated from playoff contention Saturday night after the Nashville Predators earned the Central Division’s final spot with a 3-1 win over Carolina, Dallas evened the game at 1-1 when Gurianov notched his 12th goal at 9:40.

However, Hagel scored for Chicago just 51 seconds later when his shot struck the crossbar and went straight up. The puck landed behind Khudobin and spun into the goal for Hagel’s ninth marker.

DeBrincat cashed in by wiring a shot from the left dot off a point pass from Kane, who provided two assists in the frame as Chicago headed into the first intermission with a 3-1 lead.

In a scoreless, penalty-free second, Lankinen stood strong by stopping 10 Dallas shots, while the Blackhawks mustered just five, leaving them outshot 27-14 over the two periods.

Early in the third, Pysyk cut the deficit to 3-2 with his third goal of the season, but DeBrincat secured the outcome for the Chicago with his 31st goal with 3:12 remaining.

It is the second time in his career that DeBrincat has topped 30 goals, the other coming with a 41-goal season in 2018-19.

The two clubs will conclude the regular season with a rematch Monday night.