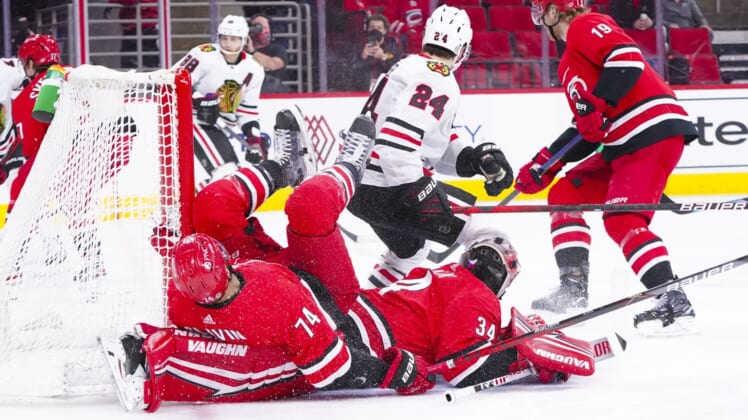 Alex DeBrincat scored 2:02 into overtime and the Chicago Blackhawks snapped a five-game losing streak by defeating the Carolina Hurricanes 2-1 on Thursday night in Raleigh, N.C.

DeBrincat scored in all three of the games this week at PNC Arena, though this was the only time the Blackhawks came out on top.

The final sequence put a damper on the regular-season home finale for Carolina, which leads the Central Division.

The Hurricanes (36-10-8, 80 points) remain in position to finish with the best record in the NHL. They matched a franchise record by stretching their points streak to 13 games. They’re 9-0-4 in those outings.

Petr Mrazek stopped 25 shots and Martin Necas scored a short-handed goal for the Hurricanes, who finished a five-game homestand at 4-0-1 with three consecutive meetings with Chicago.

Carolina has two road games remaining against the Nashville Predators.

Chicago tied the game on Riley Stillman’s redirection of Pius Suter’s delivery with 3:01 to play in regulation. It was the first NHL goal for Stillman, whose father, Cory Stillman, helped the Hurricanes win the Stanley Cup in 2006.

DeBrincat has a season-best five-game goals streak. He has a team-high 29 goals.

The Hurricanes finished their home slate with a 20-3-5 record and they’ll start postseason play in their home building later this month.

Mrazek stopped nine shots in each of the first two periods.

Mrazek had returned to action Tuesday night following an absence of two weeks because of another injury. Coach Rod Brind’Amour had pointed out the importance of getting the goalie work prior to the playoffs.

Necas scored just before the midway mark of the first period, with an assist from defenseman Jani Hakanpaa. Necas has two career short-handed goals, with those coming in his past two games after going the first 72 games of his career without a short-handed point.

Carolina forward Sebastian Aho wasn’t on the scoresheet so his nine-game points streak — the longest active mark in the league — was halted.