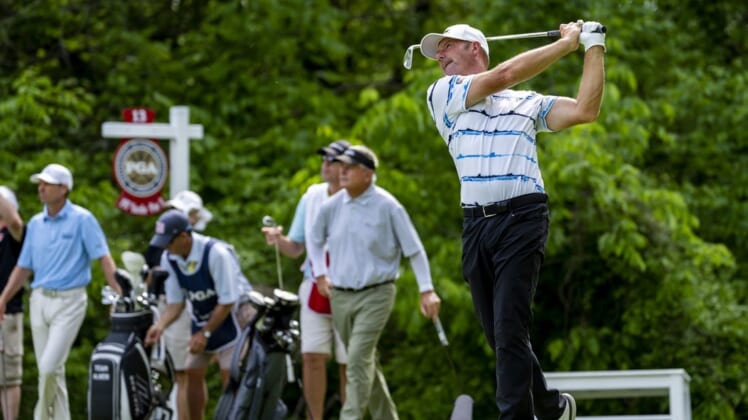 Alex Cejka of Germany began his pursuit of a third major on the PGA Tour Champions by shooting a bogey-free, 6-under-par 64 to take the lead in the first round of the Bridgestone Senior Players Championship on Thursday in Akron, Ohio.

Cejka rolled in six birdies at Firestone Country Club to grab a two-stroke lead over David Toms (4-under 66). Jerry Kelly and South Africa’s Ernie Els were tied for third at 3-under 67.

Cejka, 51, won two majors in 2021 during his rookie year on the senior circuit: the Regions Tradition and the Senior PGA Championship, three weeks apart. He has not won any tournament since then.

“It’s a big difference if you play on this tour or if you play on the PGA Tour against 23-year-old kids who hit it 50 yards past you, make every putt, make every chip,” Cejka said. “The last couple years on the PGA Tour I played good, but the courses were just too long. You know, too much pressure. … The game has changed in the last couple years, everybody hits it so far now. So it’s really pleasant to play like guys my distance with no cut.”

Cejka started his round on the back nine and birdied four of his first seven holes before adding two at the end of the round, including a mid-range putt on the par-4 ninth.

“My thinking was great. My execution was great today,” Cejka said. “There’s still three rounds to go, a lot of things can happen on this golf course, but I’m happy round number one is done, you know, and we’ll see what happens.”

Toms recorded six birdies along with two bogeys. The 58-year-old has won one senior major before, the 2018 U.S. Senior Open.

Kelly, the 2020 Senior Players winner, started on the back nine and went 1 over through nine holes before turning things around with three straight birdies at Nos. 3-5. He added one more at No. 8 before his day was done.

“A little disappointed they knocked the rough down this year,” Kelly said. “I mean, this is a major, it should be tough for us. It’s a tough golf course, but we should have rough out here, no question. I would like to think that’s a one-tournament deal and it comes back next year.”

Steven Alker of New Zealand, the Schwab Cup money leader who won the Senior PGA Championship in May, shot a 2-under 68. He was one of eight players tied for fifth at that score, along with Miguel Angel Jimenez of Spain, Rocco Mediate, Tim Petrovic, Shane Bertsch, Bob Estes, Cameron Beckman and Tom Gillis.