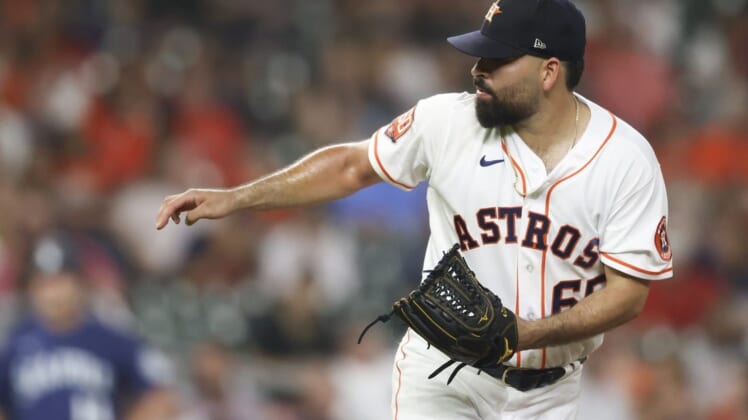 Alex Bregman homered in the first inning and hit a go-ahead double in the eighth as the Houston Astros claimed a 4-2 victory over the visiting Seattle Mariners on Thursday in the opener of a four-game series.

Houston not only snapped a three-game losing skid, it claimed the season series with the Mariners while extending its lead in the American League West to 11 games over second-place Seattle. The Astros are 10-6 vs. the Mariners this year with just the games the next three days remaining.

With the score 2-2 in the eighth, Yuli Gurriel was hit by a pitch from Mariners reliever Andres Munoz (1-4) and swiped second base. Bregman then hit an RBI drive to left-center field, went to third on a groundout and scored when Munoz uncorked a wild pitch.

Astros closer Ryan Pressly notched his 21st save but saw his streak of consecutive batters retired end at 32 when Mariners shortstop J.P Crawford smacked a two-out single to left in the ninth. Pressly matched the franchise record set by Justin Verlander from Sept. 1-7, 2019.

Rafael Montero (4-1) retired all four batters he faced to earn the win.

Mariners right-hander Logan Gilbert produced a near duplicate performance of his previous appearance against the Astros, when he took a 3-1 loss on Saturday after allowing just two runs on five hits and one walk with eight strikeouts over six innings.

This time, Gilbert gave up two runs on five hits and two walks with six strikeouts over six innings.

In the first inning, Yordan Alvarez smoked a two-out double to right off Gilbert before scoring on a two-run homer to left from Bregman, his 13th, for a 2-0 Houston lead.

In the third, Urquidy allowed the first three batters he faced to reach safely, as he issued walks to Dylan Moore and Julio Rodriguez following a leadoff single from Adam Frazier. Ty France followed with a sacrifice fly and Carlos Santana a run-scoring groundout that pulled Seattle even at 2-2.

Crawford finished with two hits for the Mariners, who were out-hit 6-5. Seattle saw its three-game winning streak end.