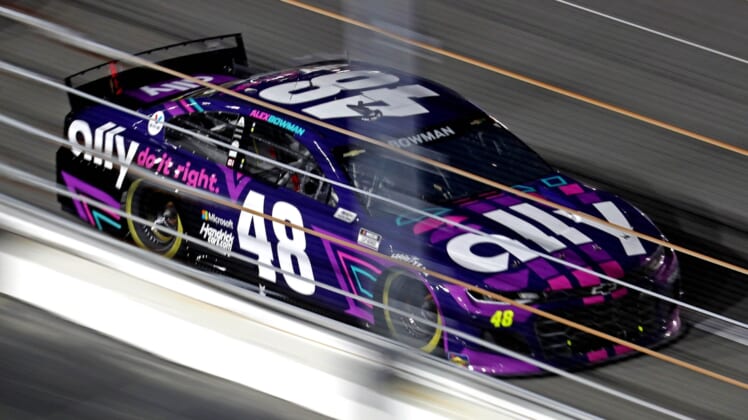 The final two practice sessions for the season-opening Daytona 500 were washed out by rain on Saturday.

Polesitter Alex Bowman was among the drivers who were looking to troubleshoot on Saturday, one day before NASCAR’s most prominent race.

Bowman wasn’t able to get a lap in around the 2 1/2-mile track at Daytona International Speedway but did get his car on the track. Bowman and his crew were trying to identify why the No. 48 Hendrick Motorsports Chevrolet was having power issues and feel the issue was resolved.

“We had a vibration issue that we had to investigate,” crew chief Greg Ives told reporters. “We initially thought it was an engine issue, but fortunately it wasn’t. The team was able to diagnose and fix it. We didn’t get a whole lot of practice today, but Alex felt everything was fine.”

Teammate William Byron also had an issue after crashing in Friday’s Duel race, and a backup Chevrolet is being prepared for him to race.

Byron was slated to start the race in the No. 2 position, but he will be forced to drop near the rear of the pack due to the vehicle change.

“It’s been fast every time it’s been on track, and I think it will be again when we get to the race tomorrow,” Byron said of the replacement vehicle. “We were still able to learn a lot in the Duel race on what we need for a setup and what we need security-wise with the handling.

“While we took a risk running up front during the Duel, those laps led only helped us learn more. Obviously we didn’t want to go to a backup car, but I think we’re still in a really good place for the 500. We’ll definitely be good to go.”

Brad Keselowski and Martin Truex Jr. are among the other drivers who are switching to backup cars for the race.