Alex Bowman ‘unlikely’ to leave Hendrick Motorsports after the 2023 season

Alex Bowman is "unlikely" to leave Hendrick Motorsports after the 2023 season as the organization and Ally Financial are "happy" with him.

Alex Bowman will be entering his sixth full-time season with Hendrick Motorsports after coming off a concussion suffered at Texas Motor Speedway last year. Bowman, 29, returned for the final race of the 2022 season but was involved in an incident with Michael McDowell.

The driver of the No. 48 car for Hendrick Motorsports now finds himself and his sponsor, Ally Financial, in contract years. This comes as the organization has paired Bowman with crew chief Blake Harris, who is a rising star in the garage area.

Now, Bowman will be looking to have his fifth straight season of winning a race in the NASCAR Cup Series. It will be a pivotal year for him; however, his future in the sport appears to be going through one team.

Related: Alex Bowman gives significant update on contract status ahead of the 2023 season

Bowman replaced Dale Earnhardt Jr. in the No. 88 car for the 2018 season and then moved to the No. 48 car when Jimmie Johnson retired at the conclusion of the 2020 season. The Arizona native. has been tasked with replacing two of the sport’s biggest icons.

With this fact in hand, it is not surprising that he is well-liked by those around him. According to The Athletic’s Jordan Bianchi, Bowman is unlikely to leave his situation at Hendrick Motorsports as the organization and Ally Financial are happy with him.

This is not surprising as every party involved has shown their commitment and happiness with each other. Bowman’s on-track success is also important to note as he never has missed the playoffs with Hendrick Motorsports.

The 29-year-old driver has been commonly called the fourth driver at Hendrick Motorsports by race fans; however, his statistics show a different story after having the second-most wins during the 2021 season, tied with Martin Truex Jr. and behind teammate Kyle Larson. 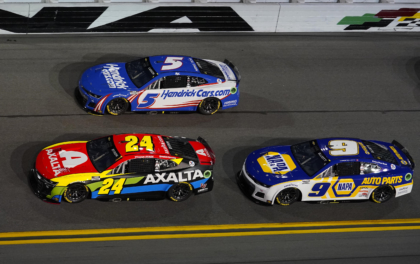 Bowman has seen success in his past and who says that is going to stop now? Harris should truly help his performances moving forward as he brought out the best in McDowell for a career year with Front Row Motorsports.

As of right now, Bowman is one of the top free agents for the 2024 season but anything other than Hendrick Motorsports would be a surprise. Ross Chastain and Denny Hamlin will also be notable free agents.

The 2023 NASCAR season is nearing its start in Los Angeles, California for the Busch Light Clash. However, the 2023 Daytona 500 is officially under one month away and drivers are getting ready for the grind once again.

Bowman will still have much to prove after being robbed of an opportunity last season. With the right support around him, Bowman seems likely for another stellar year.